CD rates start falling after raids by the FTC

CD rates start falling after raids by the FTC 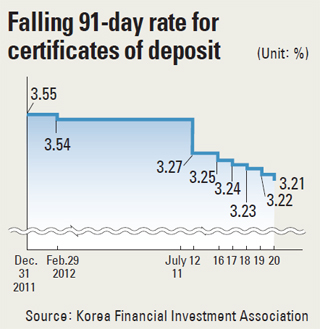 After raids on financial institutions accused of fixing their interest rates on certificates of deposit, the rates that had barely moved since the end of last year fell for four consecutive days through yesterday.

The CD interest rate, a benchmark for loans, mortgages and bank derivatives, remained at 3.54 percent from Feb. 29 to July 11, the day before the central bank downgraded its benchmark rate. It then fell by 0.01 percentage point a day for four straight days.

According to the Korea Financial Investment Association (Kofia), the 91-day rate stood at 3.21 percent yesterday.

“Obviously, the investigation has had some impact, but a more legitimate reason is that the latest cut in the key interest rate has pushed down not only the CD rate, but also Treasury bonds and corporate bonds,” said an official at Woori Investment & Securities on the condition of anonymity.

A CD is a time deposit issued by banks at an interest rate set by Kofia based on the average bank rates and an evaluation of yields by securities firms.

Industry insiders said the probe resembles the so-called “Libor scandals” in the United States and Britain, which led to British bank Barclays paying a $456 million fine last month. Libor, the London interbank offered rate, is a benchmark in the global financial market.

CD rates are still 0.3 percentage points higher than the 2.92 percent interest rate on three-month bank bonds. “It is hard to predict how far CD rates will go down, but considering recent movements in the derivative market, they are likely to slide further,” said an industry insider.

The controversy over rigging interest rates on CDs is having negative repercussions in the local financial market.

More than 4,500 trillion won ($3.9 trillion) in financial derivatives and about 324 trillion in bank loans are linked to the CD rates.

If the nine local banks and 10 securities firms are found guilty and consequently the CD rates are found to be invalid, foreign investors in derivatives might take legal action. In addition, foreigners would be far more likely to divest from Korean derivatives, according to financial analysts.

An IRS, commonly used for both hedging and speculating, is a derivative instrument in which two parties agree to change interest rate cash flows from a fixed rate to a floating rate or from one floating rate to another. Won-based IRS transactions use CD rates as the floating rate.

The three-year IRS rate plunged 0.24 percentage points to 2.62 percent yesterday from 2.86 percent before the launch of the investigation.

“Investors are forecasting that the CD rates are highly likely to fall after the investigation, so they are selling the IRS despite large losses,” said a bond dealer at a brokerage.

“All derivatives based on the CD rates should have renewed contracts if collusion is confirmed,” said an official at Kofia. “This will hurt the reputation of the Korean financial market among international investors.”

Replacing the CD rate with other ones such as the cost of funds index (Cofix) won’t help, financial people say, because it would take time and cause an extended period of market uncertainty.

“Foreigners conventionally tend to avoid uncertainties, so they might leave the Korean derivative market,” said an insider.

According to an analysis by Hyundai Securities yesterday, the four major banks - Woori, Shinhan, Kookmin and Industrial Bank of Korea - would have to bear massive financial losses if CD rates are lowered.