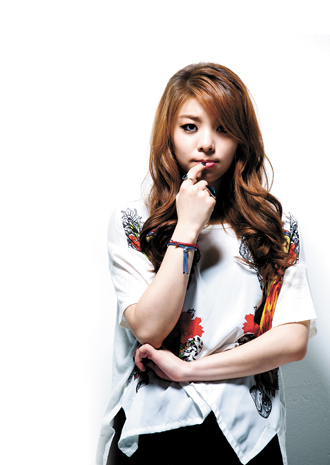 Ailee, the 23-year-old singer sensation who seemed to rise out of nowhere, has been all the talk since her February debut and has been referred to as “The Exceptional Rookie” within the music industry. After the release of her first album, the Korean-American, who was born in New Jersey, topped every major music chart in Korea, outdueling superstar idols Big Bang and Miss A.

In March, Ailee ranked in second place on the famed Monthly Chart and has since starred on KBS-2TV’s “Immortal Songs,” a program that involves a reinterpretation of classics by contemporary singers.

When the young singer is onstage, not an ounce of nervousness can be detected. “When Ailee first appeared on the show, it was legendary singer Patty Kim’s last performance, so everybody was tense, but Ailee seemed to be unperturbed,” says Go Min-goo, the producer of “Immortal Songs.”

Ailee is a gifted soloist who has risen to fame without following the typical K-pop path, led by entertainment conglomerates like JYJ and YG.

Although Ailee kept receiving calls from world-renowned entertainment agencies such as Universal, Warner Music and Sony, she firmly rejected them and was fixed on making her debut in Korea. Her determination finally enabled her to sign a contract with her current agency, YMC Entertainment.

But unlike her energetic and charismatic image on stage, she was reticent when sitting down with the JoongAng Ilbo. Unlike other young stars who were willing to pour out their life stories, Ailee only answered questions briefly. Later on she explained that she was quiet because, “I’m really not that special.”

Is it true? Ailee started to reveal her vocal talents in 2006 through self-made singing videos that she posted online that won over the hearts of many viewers. Two years later, Ailee performed Rihanna’s “Unfaithful” on the singing competition on NBC’s “Maury Show” in the United States and won second place. It was the first time an Asian placed that high on the show and the news quickly spread online. That same year, Ailee posted a video of herself singing Mariah Carey’s “Hero,” which now has more than 10 million views.

Q. Were you determined to be a success when you made your debut?

A. Nothing has changed and I still dream of winning a Grammy Award. I understand that realizing my dream is going to be very tough but I don’t want to set my goal too low because if I do, then I think I will easily give up.

No, I performed underground with several other second-generation Korean-Americans after I entered university, and just like indie labels, I was assigned to be the lead vocal, the other a rapper and another the manager of our shows. We usually performed in New Jersey.

What was the reaction?

Well, it wasn’t like I was performing in front of people that I knew, but I could see that the audience was surprised and was like, “Who is she?”

You could have participated in an audition rather than posting your videos on YouTube.

I didn’t want to compete through singing.

Since when did you want to become a singer?

I can’t remember exactly, but I think at some point I realized that I wanted to sing forever. Even in my years in Pace University, I chose to study journalism, and not music.

Whom have you taken after for your singing ability?

I don’t really know. My dad is just a businessman, and as for my mom, apart from playing a part in a choir, she is just an ordinary housekeeper.

Did your Korean agency recruit you themselves?

No, the executive of the agency was friends with my uncle’s friend. My uncle had shown one of my videos and through some connections, I came to Korea in 2010 for an audition. I sang Big Mama’s “Resignation” and the executive recruited me on the spot.


Why did you want to make your debut in Korea?

But you were born and raised in America.

I was interested in Korea ever since I was young, and I even spent a year in Korea when I was 10 years old because my parents thought that it was important for me to learn Korean.

As my fluency in the language became more pronounced, I listened to K-pop as much as I did with American pop songs. I especially liked the songs by Fin.K.L and SES.

I think I wanted to know more about Korean culture and I came to like Korean songs more than I thought I would have. I still come across Korean words that I don’t know the meaning of, but I can sense their basic gist.

What is the difference between K-pop and American pop songs?

I don’t think I can clearly explain it, but K-pop has a somewhat enticing magnetism. R&B has a very personal style of vibe and soul, whereas K-pop feels like it’s united into one single element. I grew up listening to both genres so I think my music will be a mix of both as well.

Your debut was late compared to Korean boy band and girl group members.

It could have been really early because I was contacted to make a debut by a major entertainment agency when I was in elementary school.

Back then, I lived in an area where many Koreans resided, and I sang in a Korean church. I think that’s how the agency heard about me. But I declined their offer.

It wasn’t the right time. I learned that you need to do things as they come along, and not to forcefully make your way out. Or else, you won’t get what you truly want.

Don’t you regret your decision? You could have been a megastar like Boa.

Not at all. Come to think of it, Boa did make her debut around that time.

What was it like, coming to Korea so late and training yourself to become a genuine singer?

It was hard, but fun as well. I tried to adapt to the Korean lifestyle and also went on a diet. I think I lost about six to seven kilograms (13 to 15 pounds).

Have you had any work done?

No. I wanted to get double eye-lid surgery because sometimes when my eyes get puffy, one of my eye-lids disappears, and since it doesn’t appear again for quite some time, it is a bit inconvenient [laughs].

I try not to listen to the original songs because if I do, reinterpreting them in my own way gets too difficult. I only have about two days to practice the new versions of the songs so sometimes I have to rely on reading the lyrics on the prompter. I think that “Morning Dew” and “Destiny” are the only two songs I was able to correctly sing without any help.

Don’t you get nervous when you go on stage?

Not really. I get really happy when I can see that the audience enjoys my performances.

So there was not even one tough performance?

I found that Hyun-cheol’s “I Don’t Like It, I Really Don’t” was hard to sing because the melody was a bit eccentric and since it was a song of the trot genre, rehearsing it was quite challenging.

When is your new song coming out?

We are doing some finishing touches on my second album. It will come out around the beginning of August.