The Korean who came in from the cold - thrice

The Korean who came in from the cold - thrice 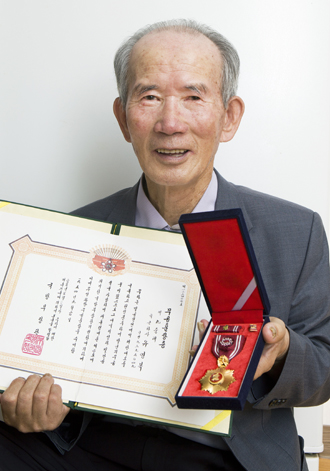 The cold war has never thawed on the Korean Peninsula, still divided between communists and capitalists 59 years after a cease-fire halted a bitter war that split a civilization and took thousands of lives.

Yoo Young-bok, 82, is one of the world’s longest and least known cold-war warriors. His terrible life reads like an allegory of the futility of ideology, the horrors of fratricide and the folly of partition.

In the 1950-53 Korean War, Yoo fought for both the North and South. He was imprisoned as a POW by both sides as well.

He is now in South Korea, which he calls a “paradise,” after 50 years living as a kind of pariah citizen in North Korea, one of the world’s poorest and most isolated states. He thinks most often of fellow prisoners of war he left behind in misery.

“North Korea was exactly like hell,” he says. “They stigmatized us and had us work until we died.”

Yoo has recounted his precarious existence as a shuttlecock in the longest cold war in an autobiography entitled “Tears of Blood,” which was published last year by a small publishing company. An English version will be published this month. The details of Yoo’s story cannot be confirmed, although he is officially recognized by the South Korean government as a soldier granted the Hwarang Military Order of Merit, the fourth level of military decorations out of five.

“Of course, I feel a bit ashamed having been a prisoner of war in North Korea for so long,” he says.

“I wrote the book to prove how miserable life is in the North, especially as a prisoner, and to remind the younger generations of the fact that we went through the Korean War.”

Here is Yoo’s story in his own words.

Born in Haeju, South Hwanghae Province in today’s North, in 1930, Yoo lived there until Japanese colonial rule ended in 1945, when his family moved to the South to escape the Soviet-backed communists taking power in the North. They settled in Seoul.

But after three years, the Korean War broke out, and his family was separated.

“During the wartime chaos, my mother wanted to go back to the North, where my grandmother was living, and she brought my two younger brothers and two younger sisters,” he recalls.

“But my father, who was working in Seoul, was determined to stay in the South with my younger sister, who took care of him.”

The family split. “We thought the war would soon end,” Yoo says.

Yoo himself had no choice in the matter. After the North Korean Army occupied Seoul, Yoo was staying at a friend’s house and a South Korean communist collaborating with the North regime raided the house.

“He abducted me and my friend,” Yoo recalls. “I was dragged to the North without saying goodbye to my family.”

He was enrolled in the 101th infantry unit of the North Korean Army and taught how to fire machine guns and use grenades. In September 1950, after U.S. forces landed in Incheon, he finally escaped his unit and surrendered to South Korean soldiers.

He was sent to a prison on Geoje Island, off the southern coast of South Gyeongsang, where roughly 170,000 North Korean POWs were jailed. He served time until June 1952, when the two Koreas reached an agreement to exchange prisoners.

In June 1952, military investigators asked Yoo in which Korea he wanted to stay and he chosed the South. He was released and reunited with his father and sister.

“My father said it would be dishonorable to live in the South labeled as a North Korean POW,” Yoo recalls. “The war was still ongoing, and every young South Korean was in battle. I had no choice but to enlist.”

Yoo served in the 5th Division of the South Korean Army and was dispatched to Gangwon.

Just a month before the armistice was signed in July 1953, Yoo was once again abducted to the North.

“I was captured once again and sent to a coal mine called Gomdok in the northeast of the country,” Yoo says. “I worked there miserably for the next 50 years.”

The Gomdok mine was one of the most notorious mines in the North, located at an altitude of 600 meters (656 yards). Many of the coal miners were fellow prisoners of war and the conditions were dire. Prisoners died of lung disease, Yoo says, or were executed for attempting to escape. Many died of starvation and the hard labor they were forced to do.

“I studied and obtained a certificate as a surveyor,” Yoo says, “to work under relatively better conditions.”

One consolation was that Yoo found his mother, two younger brothers and two younger sisters alive in the North.

“My mother was living a miserable life, and died soon after I was reunited with her,” Yoo says. “I brought my four siblings to the mine and raised them.”

But Yoo was stigmatized as a South Korean POW and excluded from getting a decent job or joining the ruling Workers’ Party. He fell out with his siblings, who blamed him for bringing stigma onto them. He married a North Korean woman who died in 1994.

“I lived in the North for 50 years, but unification never came,” Yoo says. “My yearning to return to the South snowballed, but North Korea never returned us POWs, even those who were aging and dying.” Pyongyang denies that there are any South Korean POWs in its territory. However, in June 2000, Yoo found hope - and then despair. The then South Korean President Kim Dae-jung made a historic visit to Pyongyang and met with North Korean leader Kim Jong-il, which was broadcast nationwide in the North.

“I believed that Kim would definitely discuss the matter of exchanging POWs,” Yoo says. “But there was not a single word about us in their dialogue.

“I thought I would die in North Korea, in hell,” he says. “Two of my siblings died and the other two left me. There was no one to take care of me.”

The aging POW determined to cling to one last hope: Defecting to the South. “I thought if I died on the way to the South, it couldn’t be any worse than dying in the North,” he says. “A month after the inter-Korean summit, on July 20, I left North Korea.”

After one week of traveling through China with the help of a 34-year-old trader, Yoo finally made it to Yanji in the northeast of China. There, he had a phone conversation with a half-brother in Seoul who came to China and brought him to the South.

As soon as he could, he revisited the 5th Division of the South Korean Army in Yeoncheon, Gyeonggi. Although no one recognized the old soldier, his name was on a list of dead soldiers. The division eventually awarded him a medal and recognized his rank as a staff sergeant.

The South Korean government gave him pension, enough to purchase a house, and overdue wages for his 48 years of service as a South Korean staff sergeant.

And then Yoo was also told that his father and younger sister were still alive in the South.

“When I finally visited my father, he was 94 and my sister was 67,” Yoo says. “He had difficulties recognizing me after 50 years. He died six months later.”

Last year, Yoo’s son managed to defect to the South with his family. Yoo now lives in an apartment in Gyeonggi with a 65-year-old South Korean woman.

“I was really surprised to see how much South Korea has developed,” Yoo says. “It is a paradise, the kind the North Korean regime keeps promising to its own people. Poor fools.”

Yoo says he is often reminded of his fellow POWs in the coal mine. “I think how happy they would have been if they could have seen this paradise with me, [even]for one day only.”

Although Pyongyang denies it holds any South Korean POWs from the war, the Ministry of National Defense said in 2005 that 1,369 South Korean soldiers were abducted during the war and 542 were reportedly still alive in the North.

“It’s really a shame the South Korean government couldn’t bring back our soldiers from the North,” Yoo says. “I hope the government makes efforts to bring back the remains of the POWs. At least in death, they should be returned home after all these years.”