A mountain owes its trees to a man

A mountain owes its trees to a man 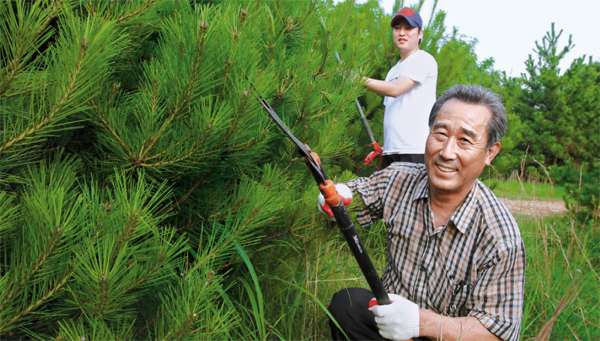 Jeong Hae-dong, dubbed the “pine tree man,” prunes his trees with his son, Jeong Jae-won, on a hiking trail of Mount Dongdae in Ulsan last Thursday. By Song Bong-geun

Jeong shows up on the trail every day with a sickle and nutritional supplements in his hands. He says it is his daily routine to look after the trees at least three hours.

“I have a passion for pine trees, and I want to make Mount Dongdae more beautiful,” Jeong said. “That’s why I’ve been planting these trees for years.”

His life-long commitment to trees began in 1972, when Jeong was in his 20s. Jeong was a worker at a marine equipment manufacturing company. He used to come to the mountain twice a year to visit his father’s grave.

When he saw the mountain ruined by logging and forest fires, he was determined to rejuvenate it with his own hands.

He chose pine trees specifically because his father grew and sold them for a living.

In the beginning, Jeong brought a single sapling in a plastic cup and planted it on one side of the trail. Every day, he hiked up the mountain to water it.

Then his ambition grew. He bought a two-year-old pine for around 4,000 won ($3.52) to replant on the trail. Around 15 years ago, he started buying more expensive five-year-old trees.

The first sapling he planted 40 years ago has now grown to eight meters (8.75 yards) and is the largest on the mountain.

Jeong, who retired from his job 20 years ago, now works in real estate. But he spends 10 percent of his income buying and planting pine. His acquaintances claim that he’s spent more than 100 million won on pine trees.

“My wife used to be against it,” he laughed. “She didn’t understand why I would voluntarily spend money to plant trees.” She long ago gave up worrying, he said.

His do-gooding has backfired a little. Nearly five years ago, people started saying he had ulterior motives for planting the trees and Jeong considered giving up.

“But then I saw how lively the mountain was turning, and I realized there was no way I would stop,” Jeong said.

Now, he is dubbed the “pine tree man” by neighbors and visitors to the mountain. His sincerity has paid off and convinced all doubters.

The trees he has planted are estimated to be worth almost 200 million won.

But Jeong said they are not his any more. “You can say I donated the trees to the community, kind of like people planting trees on Arbor Day,” he said.

After surgery for a brain tumor in 2010, he visits the mountain even more frequently with his 34-year-old son Jeong Jae-won.

“I want to plant 20,000 pine trees on Mount Dongdae,” he said in an interview last week. “I hope I can inherit my father’s title as the ‘pine tree man.’ ”