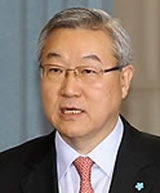 Foreign Minister Kim Sung-hwan said yesterday that he will push the United States to lift long-time restrictions on the reprocessing of nuclear fuel as the two sides renegotiate their nuclear treaty that is set to expire in 2014.

Minister Kim told the JoongAng Ilbo yesterday that Washington has hinted it may reconsider its contentious prohibition as stipulated in the 1974 bilateral agreement.

The issue of nuclear reprocessing has been controversial as the South is dependent on nuclear energy and is running out of storage space for spent fuel. The United States has restricted the practice because the plutonium and the uranium that results from nuclear reprocessing can be used to build atomic bombs.

According to Minister Kim, Washington is showing more flexibility on the issue.

“We were informed that Washington isn’t in a position of ‘saying never’ to the matter of allowing the South to reprocess nuclear fuels,” Kim said yesterday. “It’s been 40 years since the bilateral agreement was signed. Considering the fact that the situation has changed [since then], we will clarify what we want.”

Due to the reprocessing restrictions, the South has annually spent 600 billion won ($526 million) on outsourcing enrichment of U.S.- or French-supplied uranium fuels overseas.

Korea has also demanded the U.S. government allow the development of pyroprocessing technology, which enables the reuse of wastes but doesn’t produce uranium or plutonium that could be used for nuclear weapons from spent fuels.

But Foreign Ministry sources told the JoongAng Ilbo yesterday that Washington is also considering allowing pyroprocessing. They did say that deadlock remains in approving uranium enrichment.

Sources also said that the renewed agreement will expire after 10 years, not 40 years like the previous agreement, as the previous long-term agreement failed to reflect South Korea’s fast-growing nuclear energy industry.

Currently, South Korea is ranked as one of the world’s top five countries in terms of capacity to develop nuclear energy, with 20 reactors in operation, six under construction and plans to increase its nuclear capacity to 38 reactors by 2030.

South Korea also plans to become an international exporter of nuclear plants. After winning a $20.4 billion contract to develop nuclear power plants in the United Arab Emirates in 2009, the government announced its objective to export 80 nuclear reactors by 2030. But the exports also need U.S. consent in advance under the current nuclear treaty.

“The level of Korea’s nuclear energy technologies has been really different since we signed the bilateral nuclear agreement,” Lee Eun-cheol, a nuclear energy studies professor at Seoul National University, told the JoongAng Ilbo.

“Considering this change of Korea’s nuclear energy capability, the agreement should be revised.”

But the issue of nuclear nonproliferation, especially on the Korean Peninsula, remains.

“There’s difficulty in considering not only economic benefits but also nuclear nonproliferation when it comes to allowing uranium enrichment,” a high-ranking ministry official told the JoongAng Ilbo.

The original version of the nuclear agreement was signed on Feb. 3, 1956, and revised in 1958 and 1965. The current version is titled “The Agreement for Cooperation between the Government of the Republic of Korea and the Government of the United States of America concerning Civil Use of Atomic Energy.”