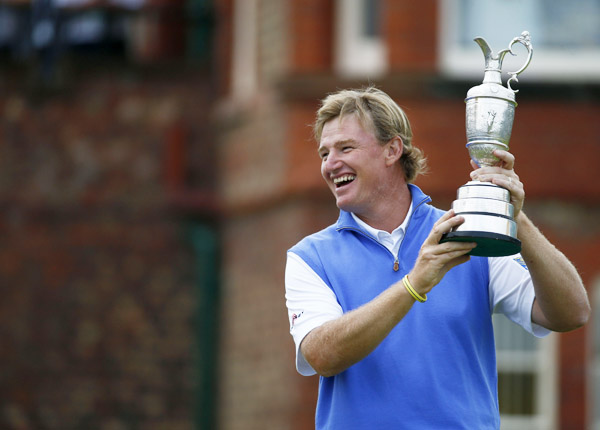 
LYTHAM ST. ANNES, England - Ernie Els plucked the ball from the hole after one last birdie and heaved it into the grandstand. At the time, it looked like nothing more than a classy gesture by a former British Open champion - not the next one.

The name on the claret jug was supposed to be Adam Scott, who had a four-shot lead with four holes to play.

But in a shocking turnaround Sunday, Els returned to the 18th green less than an hour later to claim the oldest trophy in golf. Scott joined a list of players who threw away a major.

That was not lost on Els, whose heart sank when he looked over at the 32-year-old Australian.

“Sorry,” Els told him. “You’re a great player, a great friend of mine. I feel very fortunate. You’re going to win many of these.”

After hitting a 3-wood into a pot bunker on the final hole, Scott had one last chance when he stood over a 7-foot par putt to force a playoff. It stayed left of the cup, and Scott dropped into a crouch. Standing off to the side, his chin quivered as the magnitude of the meltdown hit him. Instead, he mouthed one word: “Wow.”

Even though Els had gone more than two years without winning and thrown away two tournaments in recent months with shaky putting, the Big Easy felt all along that something special was going to happen at this British Open.

“I know I let a really great chance slip through my fingers today,” Scott said.

On a wind-swept afternoon at Royal Lytham & St. Annes that blew away the hopes of Tiger Woods and a handful of others, Scott looked steady as ever by going eight straight holes without making bogey. And that’s when it came undone.

“I had it in my hands with four to go,” Scott said.

A bogey from the bunker on the 15th cut the lead to three. That was followed by a three-putt bogey on the 16th, where his 3-foot par putt spun in and out of the cup and made the gallery gasp. From the middle of the 17th fairway, he hit a 6-iron that turned left, ran down the slope and took one last bounce in shin-high grass.

“I thought, ‘Hold on. We’ve got a problem here,’ ” said Graeme McDowell, playing with Scott in the final group.

By then, Els had posted a two-under-par 68 with a 15-foot birdie putt on the final hole, a cheer that Scott recognized while playing the 17th. Scott failed to get up-and-down for par from the rough and suddenly was tied.

Els headed to the practice green, where it rarely works out for him. In perhaps the most crushing defeat in a career filled with them, Els was on the putting green at Augusta National in 2004 when Phil Mickelson made an 18-foot birdie putt to win the Masters.

“I just thought, ‘I’ll probably be disappointed again,’ ” Els said. “You’re not really hoping the guy is going to make a mistake, but you’re hoping you don’t have to go a playoff, you can win outright. This one was different, because I feel for Adam.”

Els, who started the final round six shots behind, wound up with his second British Open - the other one was 10 years ago at Muirfield - and fourth major championship at a stage in his career when it looked as if his best golf was behind him.

“Amazing,” Els said. “I’m still numb. It still hasn’t set in. It will probably take quite a few days because I haven’t been in this position for 10 years, obviously. So it’s just crazy, crazy, crazy getting here.”

The celebration was muted, unlike his other three majors.

“First of all, I feel for Adam Scott. He’s a great friend of mine,” Els said. “Obviously, we both wanted to win very badly. But you know, that’s the nature of the beast. That’s why we’re out here. You win. You lose. It was my time for some reason.”

The wind finally arrived off the Irish Sea and ushered in pure chaos - a mental blunder by Woods that led to triple bogey on the sixth hole, a lost ball by Brandt Snedeker that took him out of contention and a topped shot that made McDowell, a former U.S. Open champion, look like an amateur.

“I guess my disappointment kind of seems relatively stupid in relation to the guy .?.?. I’ve just seen a guy lose the Open Championship,” said McDowell, who played in the final group of a major for the second straight time.