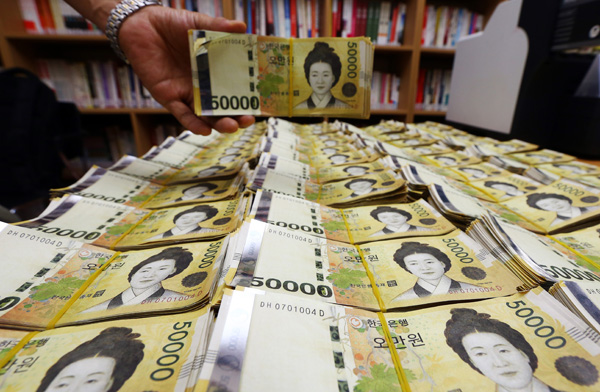 In addition to the counterfeiting, the two circulated the fake bills through distributors recruited through a Web site.

One of the distributors was surnamed Park, who was arrested along with two others earlier this month on charges of passing out counterfeit money.

Police said the trio received 100 of 50,000 won bills from Bang and Kim, whom they had met through a job-recruitment Web site.

They used 51 fake notes on more than 40 occasions at convenience stores in Seoul and surrounding areas to buy low-priced items like packs of gum or cigarettes to receive real money as change.

The accomplices deposited 2.57 million won in a bank account under a borrowed-name that belonged to Bang.

Police arrested Park and the other two distributors, all in their teens, on July 7 using CCTV clips from convenience stores. Another 40 fake notes were also found to have been passed to another person via the Web site.

The authority said the two counterfeiters opened up a borrowed-name bank account before seeking distributors on the Internet. They told the teenagers that “when you believe it is real cash, it becomes real cash,” according to police.

Bang and Kim, who have known each other since elementary school, purchased a computer, laser printer and paper-cutting machine to make the counterfeit notes in a rented officetel studio flat. Authorities found the counterfeiters through a bank account and cell phone purchased using fake identities.

The police said Bank and Kim planned to circulate the notes to other parts of the country, “keeping some 5,500 notes for later use in their vehicle.”

Police added that 40 of the counterfeit notes are believed to be still circulating.