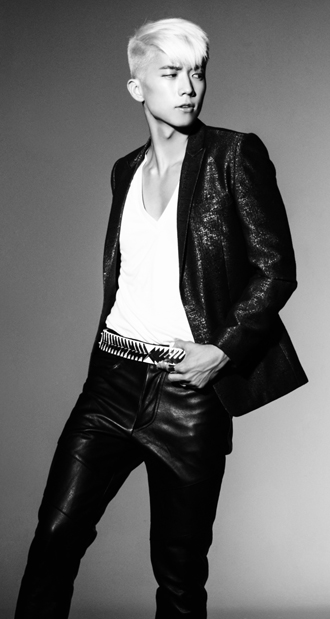 Jang Wooyoung of boy band 2PM released his first EP “23, Male, Single,” becoming the first member of the K-pop group to embark on a solo career. Provided by JYP Entertainment

Jang Wooyoung of boy band 2PM has been waiting his turn for a long time. The 23-year-old rose to fame with five other bandmates by his side.

But for the first time, the spotlight will shine on Jang alone as he embarks on a solo career. Without other singers sharing the stage, Jang stands tall with his sexy and agile performances showing how talented individual members of larger K-pop groups can be.

With his first EP “23, Male, Single,” Jang stands out in the male-solo dance market, filling the void left by Rain when he began fulfilling his mandatory military service.

Jang said he thoroughly prepared for his solo debut and earned the nickname “Boss Jang” from his colleagues at JYP Entertainment. He has been obsessing over every detail of the project, personally presiding over staff meetings and grilling colleagues for the past six months.

During a recent interview with Ilgan Sports, the JoongAng Ilbo’s sports and entertainment daily, Jang turned into a serious professional whenever he mentioned his new career.

“People have already seen me as a dancer in 2PM. This time I want to let them see Wooyoung as a singer, doing music with a serious attitude,” Jang said. The following are excerpts from the interview.

A. I was too tense and the tension was visible on my face. It was supposed to appear much more relaxed and sexy. The performance left much to be desired but hopefully it will gradually get better.

You are the first member of 2PM to embark on a solo career. How did it begin?

Park Jin-young [CEO and founder of JYP] made the proposal last year, saying, “I think you’d better go first.” I agonized over it for more than three months before I said yes. I have asked about my group members’ intentions, too. To be honest, I was kind of walking on eggshells, but the members encouraged and supported me more than I ever expected.

Being the first solo artist must have been demanding.

Performing solo is what I’ve always dreamed of. I wasn’t thinking of performing as a group when I first developed an interest in singing. My heroes - Michael Jackson, Park Jin-young, Rain - they were all soloists as well. The documentary on Rain’s performance in the United States motivated my resolution to become a singer. Back then I was crazy about dancing, and dancing led me to JYP Entertainment. No wonder debuting solo was more exciting than demanding to me.

How was the process of creating the EP? We’ve heard it included some torturing of the staff.

I’ve been nagging the staff a lot since we began full-scale preparations this January and ended up being called “Boss Jang” by the staff. I wanted to bring out the best results, which led me to keep asking questions, searching for references and attending all the meetings. In other words, torturing them. Luckily the record came out satisfactorily. I guess the rest is up to me on the stage.

The title track “Sexy Lady” is also written by Park Jin-young. Haven’t you thought about putting in some changes?

We didn’t start with Park Jin-young’s song fixed as the title. I just wanted the stage to be tidy and sophisticated overall. “Sexy Lady” conveyed the exact kind of dandy sexiness I wanted to present this time instead of a muscular, macho image. Besides, I realized there is no one who cares for me and knows what is right for me more than Park does. He was so full of drive, he kept rewriting the songs even before I asked.


What do you think is sexiness?

A well-balanced body and an easy and composed attitude at work - like what we see in the actor Lee Byung-hun.

Members of 2PM are known for getting along well with each other. Doesn’t the popularity competition sometimes feel burdensome?

Girl groups are not the only ones that sit around and sulk.

We pout and fight over nothing. Conversations let us not dwell on those troubles.

We talk about why we were upset, pointing out things we’d rather not do and calm down by saying, “I will amend my ways.”

But we still don’t touch on sensitive topics like our abilities or competition. In a sense, we’re all in a friendly rivalry - not that we hint at it. In our hearts, all our members are serious hard workers.

The word “single” in the title catches eyes. Have you been single for long?

2PM hasn’t gotten permission from Park to date yet, so no comment on how long I have been single. But one thing I can say is that I don’t have a girlfriend right now, nor do I have a driver’s license to sneak away from the manager’s watch.

Your sister has also found herself in the spotlight for her beauty.

To be honest, the attention paid to my sister sort of baffled me. I was hoping it would be a chance to appreciate my parents, but against my expectations, it was my sister who got the spotlight. My father’s in government service and he was opposed to me becoming a singer.

Even after the debut, he would always answer my calls in a seemingly brusque manner. But then last year when I was shooting the drama “Dream High,” he was literally shouting at the phone saying, “Keep it up just like that!”