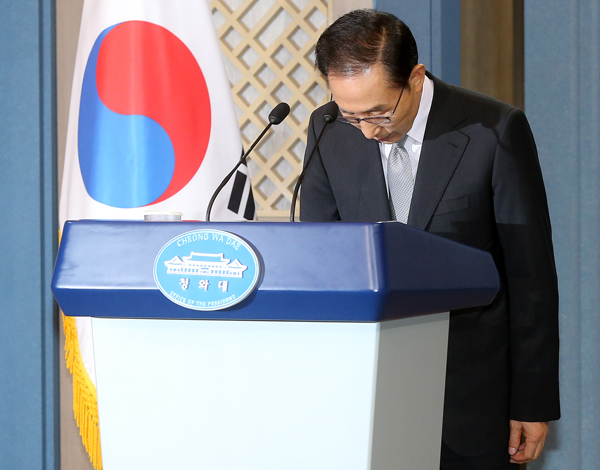 President Lee Myung-bak bows yesterday at a press conference held in the Blue House to express remorse over graft charges against his brother and aides. [YONHAP]

“I bow my head and offer an apology for troubling the people with the scandals,” Lee said, dipping his head deeply before the cameras.

During the four-minute press conference, Lee read a short statement that he personally wrote. A solemn Lee deeply bowed his head in the middle and at the end of his address.

“I once thought it would be more appropriate to wait for the prosecution’s investigations’ outcomes,” Lee said, “But I decided to stand here because frankly revealing my feeling before the people is my duty.”

Lee’s elder brother Lee Sang-deuk was taken into custody earlier this month on charges of receiving bribes from two troubled savings banks and a conglomerate. The prosecution is expected to file an indictment against the 77-year-old political mentor to the president at the end of this week.

Over the past months, key associates and political allies of the president have faced graft charges in a string of scandals involving savings banks and a real estate developer.

Lee said yesterday he is ashamed of the scandals after promising the public “clean politics” from his administration.

“Whom can I blame?” Lee said. “Everything is my fault. I will accept all criticisms.”

Lee said the circumstances surrounding the country are too grave for him to just sit in despair and shame. Lee vowed to pay full attention to fulfilling his duty of overseeing state affairs.

“I will do my job with humility and undying determination,” Lee said.

The president did not take any questions from the media.

Yesterday’s statement was Lee’s fifth apology to the nation since he took office in February 2008. According to the Blue House, Lee wrote the statement personally in his own hand. Reflecting his distress, the president’s voice trembled as he spoke.

Speculation was high that Lee would issue an apology later this week because his elder brother is scheduled to be indicted before Sunday. The president’s longtime aide, former presidential personal secretary Kim Hee-jung, also attended a warrant hearing yesterday morning on charges of receiving money from a troubled savings bank.

The largest opposition Democratic United Party yesterday said Lee’s apology was empty words. “For his apology to be accepted,” Park Yong-jin, spokesman for the DUP, said, “he should make an honest confession about his presidential campaign funds.”

The DUP has argued that the president’s brother and aides received bribes to finance Lee’s 2007 campaign.

The ruling Saenuri Party said it also regrets the situation. “It is a deeply rooted practice in our politics that presidential relatives and aides are involved in scandals,” said Kim Young-woo, the Saenuri Party’s spokesman. “And we feel extremely regretful that Lee was not an exception.”