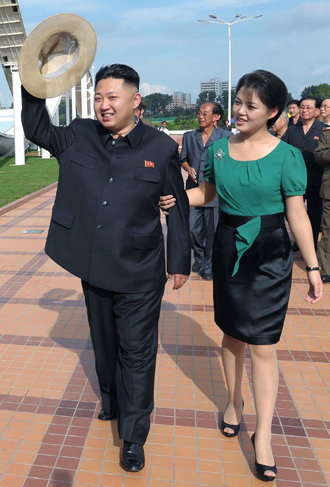 North Korea’s first lady has visited South Korea, charmed southern visitors at the Mount Kumgang resort in 2004, and may have won the love of leader Kim Jong-un through her renditions of local hits such as “Don’t Ask My Name” and “I Can’t Say It Now.”

On Wednesday evening, the North’s state-run media released a photo of Kim and Ri touring an amusement park in Pyongyang, with no identification of Ri. A few hours later, it released different pictures from the same event with the caption, “Our respected Marshal Kim Jong-un and his wife, Comrade Ri Sol-ju, looked around the Rungna People’s Pleasure Ground in Pyongyang, with other diligent workers of the party, the state, and the military and wives of state and international officials,” the KCNA reported. 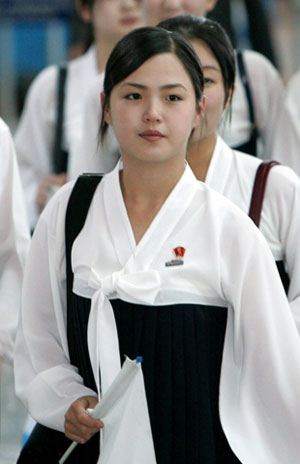 A report on Korean Central Television also described the couple’s tour of the amusement park, saying, “As the welcoming song echoed, Marshal Kim Jong-un appeared at the completion ceremony with his wife, Comrade Ri Sol-ju.”

None of the reports gave any further details about the first lady.

At a meeting of the National Assembly’s Intelligence Committee yesterday, National Intelligence Service’s officials briefed representatives on what they know about the North’s new first lady.

Kim and Ri apparently married in 2009, according to the National Intelligence Service, the lawmakers said. Apparently the couple have one child.

“We officially confirm that in September 2005, Ri was in a delegation cheering the North Korean team at the Asian Athletics Championships in Incheon,” Jung said.

“Ri graduated from the Kumsong Middle School No. 2 in Pyongyang, and studied vocal music in China, and had been a singer of the Unhasu Orchestra until 2011,” Jung added. “So far, we understand that she is just a daughter of an ordinary family, not of a high-ranking military official. We haven’t yet confirmed the rumor that Jang Song-thaek introduced them.” Jang is Kim Jong-un’s uncle and is considered his main protector in power circles.

“Kumsong Middle School No. 2 is where talented children are selected at ages of 4 or 5 to become members of state-run art troupes,” Jung said. “Ri was one of them.”

Yun, the Saenuri lawmaker, said the intelligence service had the exact years of Kim and Ri’s birth.

The JoongAng Ilbo searched all records on North Koreans who have visited the South since 2000 and found that a 16-year-old girl named Ri Sol-ju visited Incheon in September 2005 as a member of a group of student supporters for a North Korean sports team.

Some South Korean reporters met the girl in Pyongyang. In November 2005, a group of reporters visited Kumsong Middle School No. 2, after being invited by the regime, and Ri appeared on stage and sang a North Korean song entitled “The Blue Sky of My Country” for the reporters.

After the performance, she said in an interview, “I want to work for an art group, like the Sea Of Blood Opera Troupe. I will do my best.” The JoongAng Ilbo also discovered that the same girl attended an inter-Korean event held at the Mount Kumgang resort in 2004, where teachers from the two Koreas met each other.

A South Korean intelligence source told the JoongAng Ilbo that Ri must be a singer of the Unhasu Orchestra that the late leader Kim Jong-il reportedly liked. The singer often appeared on state media singing songs such as “Soldiers’ Footprints,” “I Can’t Say It Now” or “Don’t Ask my Name.” Clips of one of her solo concerts are uploaded on YouTube. “Although her hair style is a bit different from that of hers at present, we see the singer is the lady,” the intelligence source said. “We assume that she was selected by late leader Kim Jong-il while she was with the Unhasu Orchestra.”

Yonhap reports that an 11-year-old student named Ri Sol-ju was also seen during a tree-planting event for young people of the two Koreas at the Mount Kumgang resort in North Korea in March 2003.