North Korea has sent balloons carrying leaflets across the border with South Korea for the first time in 12 years, the defense ministry said yesterday, a move seen as stepping up bellicose rhetoric against Seoul under its young leader.

Balloons carrying about 16,000 leaflets were discovered by soldiers near the border area from Monday and Thursday, which condemned Seoul’s arrest of a pro-Pyongyang activist and its attempt to destroy the statue of one of its late leaders, the ministry said. 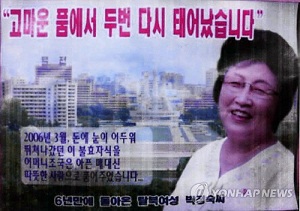 It is the first time leaflets have been sent to the South via balloon in 12 years since the two Koreas agreed to stop psychological warfare against each other near the border in a landmark 2000 summit between late South Korean President Kim Dae-jung and late leader Kim Jong-il.

“It seems that North Korea [sent the leaflets] to claim the legitimacy of its regime,” ministry spokesman Kim Min-seok said at a briefing. “Analysis is currently underway to figure out [North Korea’s] intentions.”

Out of 10 kinds of leaflets, several leaflets accused South Korea and the U.S. of sending a defector to destroy the statues of North Korea founder Kim Il Sung, warning “a war could take place” on the Korean Peninsula if Seoul overlooks “the big terror.” Seoul and Washington flatly deny the accusations by the North.

The leaflets also condemned Seoul’s detention of Roh Su-hui, a pro-North Korea activist who was apprehended for visiting North Korea without government approval in violation of the national security law that bans unauthorized trips to the communist state.