Driver looks to conquer Korea, then the world

Driver looks to conquer Korea, then the world 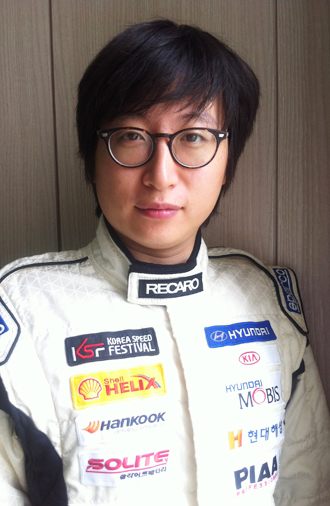 At first glance, many people would probably think that this tall, handsome guy with glasses is just a normal person who drives a car to work.

But when Kang Byung-hui puts his hands on the steering wheel, he shows everyone what he is good at: racing.

“When I drive, it feels like I’m re-energized and I get refreshed,” Kang said. “It has become an important part of my life.”

Kang currently races at the Korea Speed Festival, the nation’s first one-make car race for professionals and amateurs, and has so far achieved good results.

He is currently the leader of the Avante Challenge Race. Kang missed first place in the opening round, but went pole-to-win in the last two races. He now has two more races to wrap up the season.

Although his job - sales manager for Chrysler Korea - prevents him from practicing regularly, Kang is putting in more effort than ever this season.

The driver had a painful experience last year when he finished runner-up at the inaugural event. Despite winning half of the four races staged, his overall points were not enough to be the season champion.

“Since it was the inaugural event, I really wanted to be the first champion,” Kang said. “But that’s in the past. I will claim the rest of this year’s races with victory and win the title.”

But the 32-year-old is not only thinking about winning the local title. In fact, he has bigger goals - racing overseas with the Korea national flag, especially at the 24 Hours of Le Mans.

“I know many Korean drivers have tried car racing overseas, but none have remained competitive for a long time,” Kang said. “I hope to be the one that sets the example.”

Many auto-racing pundits say that Kang has potential. Especially, one of his advantages compared to other drivers is that he speaks fluent English after graduating from Daewon Foreign Language High School and majoring in English literature at Yonsei University.

“I started to learn English because all those auto-related magazines were printed in English when I was young,” he said. “But to be successful overseas, you also need good sponsors and obviously good driving skills.”

To many of his colleagues and friends, Kang is known as a “true auto-lover.” Automobiles have always been a part of his life. He even met his wife at a car event.

Kang said that he “clicked” with cars from a very early age. Just like other boys, he liked to play with car toys and draw cars in his sketchbook. But when his father taught him how to drive at the age of 11, he quickly felt in love with it.

“My father was very into automobiles and he was open-minded,” he said. “I still remember the feeling of my first driving experience. It was magnificent.”

Kang said he was tall enough to drive even at that age. Under his father’s guidance, he just drove around the parking lot of their apartment in Jeonju, North Jeolla. But when he moved up to middle school, his father took him to the streets.

“My father was a doctor and when emergency patients came to hospitals late at night, he sometimes let me take the driver’s seat,” Kang said. “I think I started to gain a basic sense of driving from there.”

Kang said he still wasn’t sure if he was going to be a racer back then, although he bought auto magazines and practiced driving techniques in empty playgrounds in school. He first entered racing in 2003 at the Click Speed Festival, after one of his colleagues asked him to join the race.

“I just entered with curiosity and didn’t think about rankings at all in my first race,” Kang said. “I had a little setback when I had a small accident in my first race, but when I ‘accidently’ won my second race, it just made sense that I should be doing this stuff more.”

At the end of this year, Kang will decide whether or not to head overseas to face a new challenge. But even before he packs his bags, he knows what to wrap up first.

“I first need to take this year’s championship,” Kang said. “I can’t go overseas without winning in Korea.”