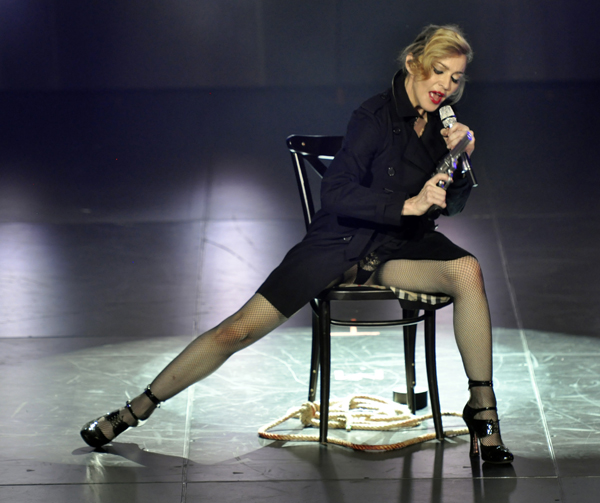 
PARIS - A small Madonna concert that the pop star said was intended to celebrate France’s tolerance instead tested it, drawing boos and cries of “Refund!” when she left the stage after just 45 minutes.

The show Thursday, billed as an intimate event at Paris’ noted Olympia club, was streamed live on YouTube. By Friday morning, the channel that showed the event disabled comments and had more than 12,000 dislikes compared with 10,000 likes.

An invitation to tweet about the show appeared to back fire - audience members used the suggested hashtag - #MDNAParis - to complain. The rebroadcast of the show cuts off when Madonna leaves the stage, apparently before the crowd realized the concert was over.

Madonna’s press agent, Liz Rosenberg, said in a statement that the star’s occasional club shows in the past “were never more than 45 minutes.”

The show was “planned as a heartfelt thank you to France which she expressed at the start of the show,” the statement said, and the performance at Olympia, a venue for top French artists, “was her way to honor her love for French artists, French cinema and a tribute to France’s long history of welcoming and inspiring artists, authors, painters, poets and minorities from other countries over the years.”

The show cost Madonna nearly $1 million to produce, the statement said, and keeping the prices at $100 involved a “tremendous effort.”

The show was announced after France’s far-right National Front threatened to sue Madonna after the singer showed a video at a Bastille Day concert in Paris with an image of the party’s leader, Marine Le Pen, with a swastika on her forehead.

“I’ve heard that a certain Marine Le Pen was upset with me,” Madonna told the crowd, according to the newspaper Le Parisien. “It’s not my intention to make enemies.” AP