Ahn found to have aided a chaebol

Ahn found to have aided a chaebol 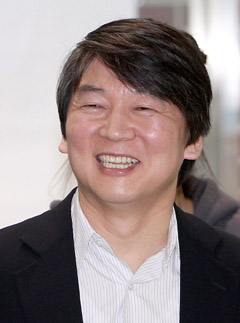 Liberal darling Ahn Cheol-soo faced criticism yesterday for his double standard toward conglomerates as his past effort to defend one of the country’s richest men during a massive accounting fraud trial was revealed.

The revelation was made only days after Ahn published a book and criticized the business practices of the country’s conglomerates and their owners who dominated Korea’s economy for decades.

Ahn, a software mogul-turned-scholar, is considered one of the strongest contenders in the December presidential election, although he is yet to announce his bid.

In April 2003, Ahn, along with other members of a businessmen’s fraternity V-Society, submitted a petition to the Seoul Central District Court, asking for leniency toward SK Group Chairman Chey Tae-won.

At the time, Chey, head of the country’s biggest oil refiner and the telecommunication giant, was standing trial on charges of massive accounting fraud.

He was accused of inflating the 2001 profits of the conglomerate’s trading arm, SK Global, by 1.5 billion won ($1.3 million).

The V-Society, created in 2000 under the leadership of Chey, was a fraternity of CEOs from chaebol and technological venture companies. Its members included top executives from Lotte, Kolon and Shinsegae as well as several famous faces of technology start-up firms, including Ahn.

After Chey was detained for the accounting fraud charges, Ahn, along with other V-Society members, signed a petition to seek leniency for the SK chairman.

“Chairman Chey has contributed to the development of information and communication and energy industries, the foundation of the country’s economy,” the businessmen wrote in the petition. “The court should give him an opportunity because he has the determination to revive his businesses.”

In June 2003, two months after the petition was submitted, Chey was convicted of accounting fraud and ordered to serve three years in prison, though he was later released on bail in September that year.

Years later, Ahn’s participation in the petition to save Chey backfired, drawing a stark contrast to what he wrote in his latest book.

Titled “Ahn Cheol-soo’s Thoughts,” the book, published on July 19, laid out his vision for the country’s future. It made an instant best seller and was also received widely in the media and among the politicians as his collection of election pledges.

In the book, Ahn advocated social responsibility of conglomerates and economic justice. He devoted chapters to criticize the practices of the family-run conglomerates.

Pointing out that it is a crime when the owner of a company abuses his authority and seeks private gain, Ahn wrote “such actions are punishable by law and system, but it is a problem that the administration and the judiciary have failed to do so until now.”

Ahn also wrote that the legal punishments against white-collar, economic crimes should be strengthened. “Justice can be realized when we end the practice of handing down lighter punishments to people with power and easily granting them pardons,” he wrote.