H.O.T. and Sechs Kies are cool again as the ’90s return

H.O.T. and Sechs Kies are cool again as the ’90s return 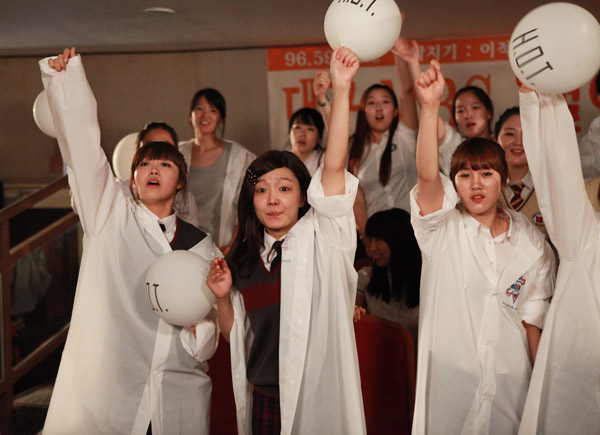 For some, the ’90s might seem too recent to be called retro. But nostalgia-inducing broadcasters and entertainers have already begun using the decade for television dramas and pop albums, bringing fans back to the days of H.O.T. and Tamagotchi digital pets.

Cable network tvN’s new drama “Reply 1997” has become the talk of the town after its first broadcast, telling the stories of fans of popular 1990s idol groups like Sechs Kies, the hip-hop rivals of H.O.T.

Hallyu singer Psy’s new single “Seventy Seven 101” reminisces about high school life during the ’90s and is topping the charts with many fans reflecting on their own experiences.

“We used to wear disco pants and Aladdin shoes,” the lyrics go, “and went for a night out at our usual coffee shop.”

Clockwise from left: The music video for comedian-singer duo Hyundon & Daejun’s “The Gloomy Song,” which adopts sounds from the 1990s; and Infinite, a Hallyu group with a recent song “Paradise” that is based on popular music of the ’90s. Provided by tvN, Im Music and Woollim Entertainment


Lyrics and musical elements in recent hit songs such as comedian-singer duo Hyungdon & Daejun’s “The Gloomy Song” and idol group Infinite’s “Paradise” are all based on the popular sounds of the ’90s.

Following in the footsteps of other local films that flash back to the good ol’ days like “Go Go 70s” (2008) and “Sunny” (2011), “Architecture 101” tells the story of a 35-year-old architect who reflects on his college years with his first love.

The hit film brought back CD players, ’90s hip-hop and sleeveless hoodies to the big screen.

“To the actual culture consumers today, the 1990s are already a distant past,” said Im Jin-Mo, a popular music critic.

The fad has made it to popular dramas as well. “Reply 1997” is about teenage romance at a high school in Busan in the 1990s. Girls make trips to Daegu just to see the idol groups they love, and boys go crazy over actress Choi Jin-sil and “Geuss” T-shirts, counterfeits that were cool two decades ago.

Since it is the first drama about idol group fans, “Reply 1997” focuses on meticulously reproducing the ’90s K-pop scene. Not only teenagers but also young adults in their 20s and 30s are raving about the drama.

Star singers on the program include Eun Ji-Won from the Sechs Kies, Tony Ahn and Moon Hee-Joon from H.O.T., and some other 1990s stars such as Kim Gook-Jin. Names of the production crew also catch people’s eyes, with many currently producing prominent TV shows.

Analysts say that this sudden trend could show that the 1990s are now mentally and physically distant enough to be called retro.

“In the popular culture market where progressive and retro always co-exist, the 1990s are now far away enough that the general public thinks of the era as a retro era,” said Im, the music critic.

He added that the ’90s, often referred to in Korea as the “era of culture and desire” due to the decade’s economic stability and modernization, symbolize a time that was full of new and exciting cultural trends, from the first generation of idol groups to the expansion of the clubbing scene. It’s no wonder viewers and consumers are happy to recreate the feelings of the decade.