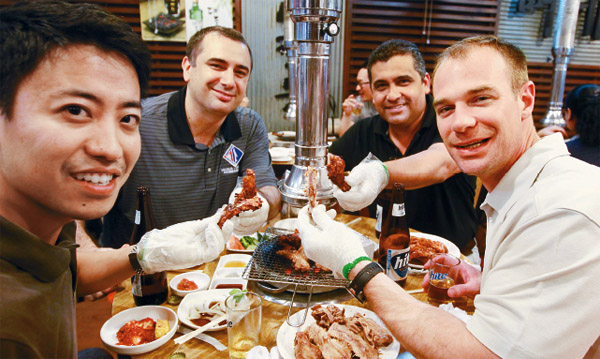 Foreign workers enjoy galbi, or short ribs, after work at Daewoo Shipbuilding & Marine Engineering shipyard in Geoje, South Gyeongsang, on July 12. Thanks to the robust business of the Korean shipbuilders, the number of expats in the southern coastal city, 8,805, now comprises 3.6 percent of the city’s population of 242,971. By Song Bong-geun


Brian Hodnett is one of 8,805 foreigners living in the coastal city of Geoje, South Gyeongsang, who came to Korea for work. The software engineer from the U.S. came halfway around the world to take a job opportunity offered by Daewoo Shipbuilding & Marine Engineering.

The software engineer brought his wife and two children earlier this year. It will take three or four more years to complete the construction project.

“I had prior work experience in 2008 at Samsung Heavy Industries in Geoje,” said Hodnett.

“I thought the city was a safe place, which prompted me to invite my family this year,” said the software expert.

Morten Johansen is another expat living in the coastal city working for the shipbuilding company. Johansen, a Norwegian, is among 40 engineers dispatched from northern Europe late last year to inspect the construction process, whose job requires them to stay in Korea at least until 2015.

“I am actually thinking about marrying my Korean girlfriend,” the inspector told the JoongAng Ilbo.

Those who came by themselves usually live in company dormitories, but those who brought family members form expat communities based on their nationality.

Community members enjoy their special holidays like Christmas and Halloween together, exchanging tips on how to get by in Korea.

The increasing number of expats from Norway led to the launching of a community center for Norwegians in the city.

Geoje has undergone changes in its demographics each year thanks to the robust business of the two shipbuilders Daewoo and Samsung.

“The number reaches over 15,000 if we take into account expats temporarily on short-term visas and those who have entered the country illegally,” said a city government official.

“With the increased mega-contracts grabbed by Korean shipbuilders, more expats from northern Europe have come to the city,” said Kim Yoo-seok, a Daewoo shipbuilding company official.

“Foreign workers from Southeast Asia seek job opportunities here because their salaries will jump up in their countries if they have working experience here,” added Kim.

Non-Korean nationals are seen in crowds every morning taking their kids to Okpo International School located near the shipyard.

Founded in 1985, the school operates a kindergarten, elementary and middle school with an official education license from the regional education office.

As demands for admission have grown in recent years corresponding to a rising number of expats, the international institution will extend its capacity to 249 in September from the current 165.

“We receive requests from Korean parents for admission, but all the quotas are already full with foreigner students,” said Kim Jeong-eun, a school official.

The downtown of Okpo-dong in the city becomes a hub for non-Korean speaking nationals every 5 p.m. as foreign employees return from work.

Many bars and restaurants have changed their interior design to fit the characteristics of northern Europe in an effort to adapt to the increased foreign presence.

One local Korean barbecue restaurant has drawn interest from expats in the town. It’s common to see foreigners holding galbi, or short ribs, with their hands wearing white gloves.

The restaurant owner came up with an idea to attract more multinational workers: putting up photos of Michael Jackson on stage wearing white gloves to tip off potential customers about the main menu.

“Sometimes it feels like I am walking in the middle of a street in Europe as the sidewalks are filled with foreigners at night,” said Kim Soo-hee, a clothing store owner.

* The first Westerner to visit Korea was Gregorio de Cespedes from Spain, who came here in 1593 as a Catholic priest with the Japanese Army during its invasion of the Korean Peninsula. More than four centuries have passed since the first Westerner touched down. Now there are at least 1.2 million foreign nationals living in the country. More than 100 global villages with more than 300 foreign residents in each village are in place.

This in-depth look into foreign communities is an attempt to portray the way of life and culture shared by non-Korean speaking nationals in the country. - Ed.