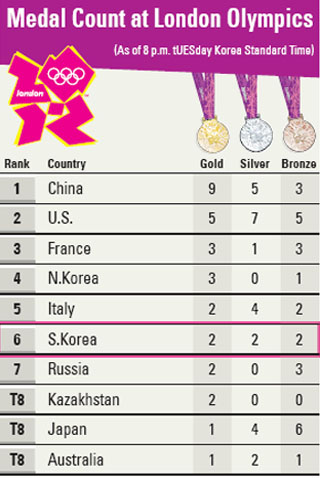 LONDON - Louis Smith grabbed the bronze medal draped around his neck, stared at the sea of Union Jacks flying in the O2 Arena and drank in the moment.

It was even better than he imagined.

Yes, that really was Britain’s first team medal in men’s gymnastics in a century in his hands. Yes, that really was Prince William and Harry standing and applauding. Yes, the sport to which the flamboyant Smith has dedicated his life really does matter - finally - in a country that spent decades treating it as an afterthought.

“It’s a beautiful day for the sport of British gymnastics,” Smith said.

One that came at the expense of some pretty big names.

The U.S., which soared through qualifying on Saturday, flubbed its way to fifth. The re-energized Russians, so calm on Saturday, cracked under the exquisite pressure the Games provide.

Not the Brits. Not this time. Not on this stage. Not after so many years of serving as a mere field filler.

Even the powerful Japanese needed a late assist from the judges, who bumped up Kohei Uchimura’s pommel horse score by 0.7 points to keep Britain from grabbing silver.

And even the Chinese, who rolled to their second straight team gold and third in the last four games, took notice.

Asked how impressed he was with Britain’s rise from doormat to medal contender, China’s Chen Yibing began applauding and said, “Very good.”

It was a fitting tribute to a program that finally shook itself awake 10 years ago, pouring in resources to revitalize the junior ranks. Getting the 2012 Games only gave them added incentive and Smith was their first success. His exquisite pommel horse routines are sublime, his legs seemingly magnetized together as he slowly, effortlessly works his way from one end of the apparatus to the other.

Smith captured bronze in his signature event in Beijing four years ago, the confidence-booster the program needed to know it was headed in the right direction. The 23-year-old known as much for his eccentric haircut and massive tattoos dreamt of a day when things would get a little more crowded on the podium.

It hardly seemed likely nine months ago, when the Brits imploded at the world championships and didn’t earn their way into the Olympics until they won a test event in January.