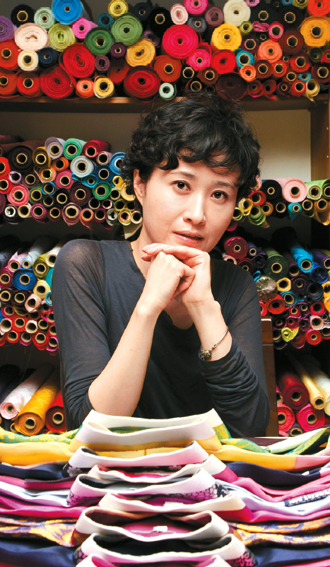 Jo Sang-gyeong poses at a hanbok couture house in Cheongdam-dong in southern Seoul, where she works when not designing memorable costumes for movies. Jo, 39, who has worked on more than 40 local films, developed an interest in hanbok during “The Concubine.” Jo says, “Hanbok requires distinct camera angles according to how they are worn.” By Choi Jeong-dong

There are many reasons for the success of “The Concubine,” which topped 2.5 million in ticket sales in June. But particularly eye-catching for the audience are the unique and elegant classical costumes that are the work of 39-year-old designer Jo Sang-gyeong.

Jo graduated from Korea National University of Arts majoring in stage art and has worked on nearly 40 films since her 2002 debut in “No Blood No Tears.” Her major works include the polka-dot dress of Geum-ja in “Sympathy for Lady Vengeance”(2005), the purple sweat suit of archer Nam-joo in “The Host”(2006), Madame Chung’s bold and sexy dress in “Tazza: the High Rollers”(2006) and Anna’s forlorn trench coat in “Late Autumn”(2010).

She has been creating hanbok, or traditional Korean attire, even after filming the movie, in the shop where she designed some of the costumes for “The Concubine.”

This would seem to be a task similar to designing for the film, but she views it another way.

“It is an entirely different process because it aims at different goals,” Jo says. 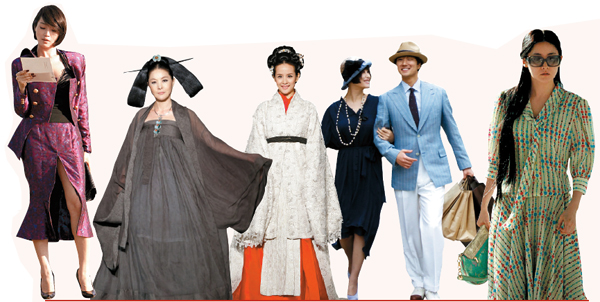 Jo-designed costumes, from left: Madame Chung (Kim Hye-soo) in “Tazza: the High Rollers”; Queen Mother (Park Ji-young) and the concubine (Jo Yeo-jeong) from the “The Concubine” in 2011; Nan-shil (Kim Hye-soo) and Hae-myung (Park Hae-il) in the 2008 drama “Modern Boy”; and Geum-ja (Lee Yeong-ae) in the 2005 thriller “Sympathy for Lady vengeance.” [JoongAng Sunday]


Q. “The Concubine” was your first historical drama. How was that different from other films you have worked in?

A. Hanbok requires distinct camera angles according to how they are worn.

Sometimes, clothes that require full shots were filmed in tight shots, and once the director filmed from a bird’s-eye view. I don’t go to studios or sets very often, but this time I had to be there for the angles.


We couldn’t figure out the precise age or dynasty settings of the film from the costumes.

Originally, the backgrounds weren’t stated in the scenario I received. I asked for the age setting from Kim Dae-Seung, the director, because I needed a footing to stand on. I went through the Joseon Dynasty’s history of attire and proposed using 14th to 16th century silhouettes for “The Concubine.”


They were not similar to hanboks in existing historical dramas, either, were they?

After taking on design for “The Concubine,” I downloaded every TV historical drama and watched them all. Overall, costumes in the dramas of the ’90s were much better than the recent ones. People got so used to the dresses from the latter part of Joseon Dynasty, it seemed that nobody questioned it when a king from the 15th century wore clothes from the 19th century. I could easily find these kind of errors ­­- characters putting on clothes that didn’t even exist in their times.

Director Kim told me I didn’t have to reach up to the late Joseon Dynasty attires and I wanted the costumes to look more plausible. I designed the costumes with a lot of confidence after referring to historical records like pictures and artifacts. Even professionals in that field complimented the costumes, so I wasn’t concerned about the historical validity at all until the movie was released and critical voices started coming out.

Taken aback, I ran to the theater and looked at the costumes more objectively. I could see that the arrangement of the colors could have contributed to such criticisms. For example, red is arranged with yellow in China, white in Japan.

Hanbok generally arranges blue next to red and such arrangements are critical in determining the overall impression of the clothes. I guess the controversy over the Queen Mother’s clothing was also due to the arrangement of black on the collar.

We assumed the costumes would be fictional as well.

Fabric was one thing I couldn’t reproduce perfectly and that’s where I played some tricks. Eunuchs used to wear chul-rik, a traditional overcoat, and since it was a work cloth for them I tried denim for it. In that manner, I made some compromises on the material, but abided by the intrinsic form and character of the clothes.

Can you describe your work process?

I have to look at the scenario; it contains a lot of important information. When directors write scenarios they picture the scene in their heads, hinting at the colors or forms of the clothes they want.

In “Oldboy”(2003), director Park Chan-wook repeatedly used the phrase “cross stripes” in the scenario. In the process of trying to visualize the text, such directions help a lot. In combining those with discussions with the director and references to the cast, the design is inferred.

Are clothes sometimes specifically stated in the scenario?

Sometimes the director designates the color. In “Sympathy for Lady Vengeance”(2005), polka-dots were mentioned in the scenario. I asked the director why and he told me that it didn’t necessarily have to be polka-dots, Keum-Ja just needed to appear dowdy. I read such things throughout the scenario.

Do you think clothes should fit not only the character but also the mood of the film?

I start working from the posters. Posters are the part of a movie that is first presented to the audience and thus potently form the film’s first impression. In that sense, “Late Autumn”(2010) was quite memorable for me. Other posters I worked on are not things I’d like to hang on my wall. They looked too fierce. But the poster of “Late Autumn” featured a good-looking man and woman, so I worked on creating such images.

Could actors be another variable to costume design?

Sometimes they change the whole concept of designs. There are situations when it has to be this actor, but he or she doesn’t go with the scenario at all and I’m asked to do something about that.

Your filmography broadly spans costumes from early 20th century attire in “Modern Boy”(2008) to military uniforms in “The Front Line”(2011).

So they often lack depth. In the case of “The Front Line,” I had never seen a military film before. I studied the Korean War, researched about warfare and interviewed people. I listened to war veterans’ memories, looked through memoirs, photos, newspapers and anything related. So, I basically started from a position of ignorance and built up from there.

What about everyday dress?

I thought it would be easier to design, but it wasn’t. Characters in “The Host,” they’re just so ordinary, nothing to research or study about. Designing out of nowhere, that is much more difficult.”

What happens to the costumes when the filming is over?

Thrown out, sent to Africa, kept by the actors as mementoes, put up for auction. Sometimes I keep them, but those I keep are usually the ones that are left out. People seem to sense some frustration when I say that.

Do you ever feel possessive?

The clothes remain in the film and that is where they are meant to be. When we put them up for auction, the winner takes commemorative photos in them and they never look harmonious. The clothes are designed for the actor, for the character and for the film. They are meaningless away from the screen. So I don’t usually feel special attachments to them. For me, that is the attractive part. It’s the same with theater costumes. The costumes are designed for stage illumination so they shine, but they ought to disappear when the curtain is closed and the actors take off their makeup.