Pavilion list breathes life into history of the Han

Pavilion list breathes life into history of the Han 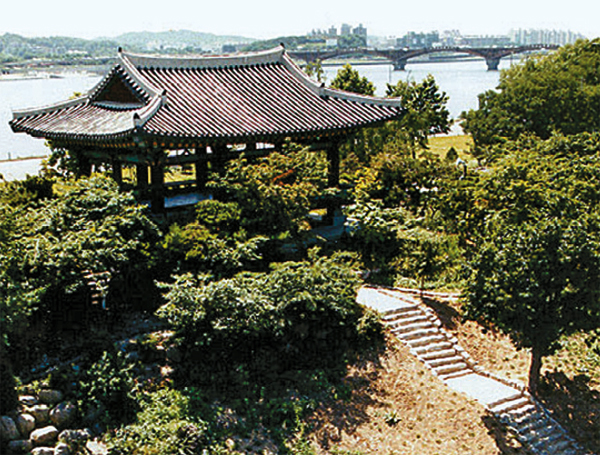 
The Han River is undoubtedly one of the most favored places in Korea for foreigners.

In particular, the hills and mountaintops along the river were places to hang out for sophisticated Joseon elites. They often built pavilions where they could sit and enjoy the view.

The Seoul Metropolitan Government recently released a list of ancient pavilions and sites along the Han. The list also contains information about the origin and history of the pavilions.

During the Joseon era, there were about 80 pavilions along the river, according to ancient documents. But today the sites of only 14 pavilions have been confirmed, according to the government.

And only one of these 14 pavilions remains in its original form. Some have been restored and still others are gone, with only their marked sites remaining.

The only one that remains in its original form is Yongyangbongjeo Pavilion in Bon-dong, Dongjak District, southern Seoul, according to the City History Compilation Committee of Seoul that works under the govnerment.

King Jeongjo (1752-1800) used to take a rest while he led royal processions to to his father’s tomb in Suwon, Gyeonggi.

“After Jeongjo left the Changdeok Palace and crossed the Han River on a bridge made of 600 boats, he enjoyed a snack at the pavilion,” says Lee Sang-bae, a member of the committee. “He also watched from the pavilion as the naval forces trained.”

Pavilions along the river often found favor with royal families.

“During Joseon times, many of the pavilions had doors, unlike the pavilions today where all the sides are open. So often they were used as villas or summer houses,” Lee says. “In case of Nakcheon Pavilion, records say Taejong held more than 20 feasts there.”

It was also at Nakcheon Pavilion that King Sejong - who reigned after Taejong - inspected the 18,000-man army led by Lee Jong-mu during the Imjin War (1592-98) between Korea and Japan.

Other pavilions are more noteworthy for their exceptional views, like the Soakru in Gayang-dong, Gangseo District, western Seoul, and Jecheon in Hannam-dong, Yongsan District, central Seoul. The former was where famed Joseon artists would go to make landscape paintings, while the latter is where Joseon officials welcomed and entertained Chinese envoys.

Meanwhile, Hyosa Pavilion in Heukseok-dong, Dongjak District, southern Seoul, is where filial piety can be felt. Roh Han, a high-ranking government official, built the pavilion for his deceased mother.

“We are working to restore some pavilions that are described in ancient documents,” said Ahn Seok-jin of the cultural heritage division at Seoul Metropolitan Government.

“It will be part of a broader plan to restore the history of the Han River that has been part of the lives of Koreans for as long as they can remember,” he added.