Doc dumps corpse of his ex-patient

Doc dumps corpse of his ex-patient 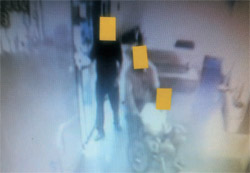 An obstetrician with a practice in Gangnam, southern Seoul, is accused of dumping the dead body of a patient-turned-friend whom he apparently accidentally killed with a sedative.

The Seocho Police Precinct sought an arrest warrant yesterday for the 45-year-old doctor, surnamed Kim, on charges of abandoning a corpse. Kim allegedly left the corpse of his acquaintance in her Audi in a parking lot early Tuesday morning.

The police said Kim met the dead woman, 30 years old and surnamed Lee, two years ago when he performed hymen reconstruction surgery on her. The two remained in touch apparently, police said.

Police say that Lee called Kim Monday night while he was enjoying some drinks and complained of having trouble sleeping. According to police, Kim met Lee at his clinic alone and administered a 5-milligram dose of Midazolam, a drug used for easing moderate to severe insomnia, at around 10:30 p.m. on Monday.

Midazolam is also used as a date-rape drug. A 5-milligram dosage of Midazolam is not deemed serious or life-threatening, police said.

When Kim came back to check on Lee two hours later, she was dead, he told police. He said he attempted cardiopulmonary resuscitation on Lee.

But his actions that followed have raised suspicions about his story. Instead of calling police, Kim transported Lee’s body through the hospital in a wheelchair, a surgical mask affixed to her face, and placed it in the passenger seat of his own car. He then received a call from the clinic asking him to return for an emergency case, which he did. Two hours later, he returned to his car and moved Lee’s body to her own auto, a white Audi.

He drove the Audi to a parking lot at Hangang Park, Jamwon, and fled the scene.