No sleeping during the Olympics for fervent fans

No sleeping during the Olympics for fervent fans 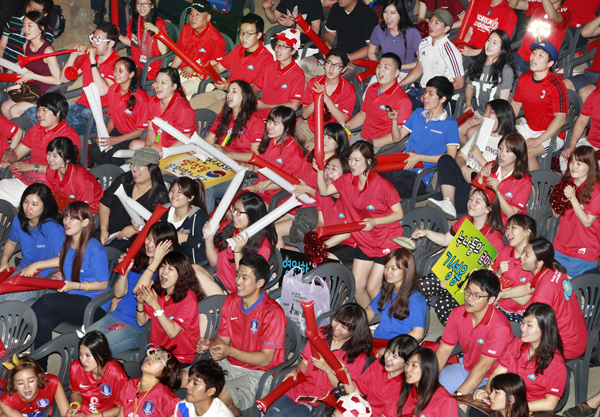 About 300 people cheer the Korean National Football Team during a Group B preliminary match between Korea and Gabon that was held yesterday at the Times Square shopping mall in Yeongdeungpo District, western Seoul. By Park Sang-moon

They pull up seats in front of a supersized wide-screen TV in the Times Square Mall in Yeongdeungpo District, western Seoul.

They take out an assortment of props, including horns, drums and colorful banners that read “Beat the enemies!”

They are not here for a protest or a rally to criticize the government. They are gathered to support the Korean national football team in its match against Gabon.

“Well, I know that I have to work tomorrow, but I decided to give my support to the Korean football team,” Park Hak-yeon, 42, who came with his wife, tells the Korea JoongAng Daily.

“I strongly believe that our Taeguk Warriors can get a medal in football for the first time in the Olympics.”

The last preliminary match for Team Korea doesn’t kick off until after 1 a.m., but most of the seats are filled with enthusiastic fans.

Football is not the only event the supporters care about.

Once the 2012 London Olympics started last weekend, many people have had their days and nights flipped. They don’t sleep so they can watch Korea compete.

The Korea-versus-Gabon match ends around 3 a.m., but the supporters still look happy as the Korean football team advances to the next round.

“I’m not tired at all,” Lim Chae-ram, 37, says. “I can’t say that I will watch the Olympics every night, but I will give my support as much as I can until the event is finished.”

Since the Games are on TV from night until early morning, Korean sports fans are becoming increasingly nocturnal, creating a sudden boom in the late-night snack industry.

Companies are taking advantage of the furor by creating various marketing events and sales on snack products that are likely consumed after supper.

According to E-Mart, sales of late-night snacks have risen exponentially since the beginning of the Olympic Games.

The retail giant reports that beer sales surged by 250 percent during the period of July 27 to Wednesday compared to the previous week, while sales in chicken jumped 181 percent. It is also reporting a 272 percent rise in snack sales.

Lee Joo-young, a 37-year-old worker, has experienced this firsthand.

As soon as his work is done, he rushes home, puts beer, soda, watermelon and ice that his wife has bought in advance into a cooler, and loads them into his car with a pup tent.

“I’m not a ‘family guy,’?” Lee says. “I enjoy hanging out with my co-workers and friends after work, but the Olympics season has changed that.”

He also brings along some electronic gadgets such as his Samsung Galaxy smartphone and iPad. Lee’s family will spend the night in the Riverside Park along the Han River watching the Olympics.

Around 9 p.m., he sets up a tent under a tree that provides shelter and turns his DMB television on that operates with his smartphone. His wife begins cutting watermelon and putting it on ice.

“Hello? Can I order two buckets of fried chicken?” Lee calls a local chicken restaurant that delivers to the Han River. “Two hours? It’s okay. Just give me a call when you get to the park. I’ll tell you where we are.”

Lee has checked the estimated delivery time of a dozen chicken stores and figures that it normally takes more than an hour and a half to get the chicken.

“Since the Olympics started, sales have dramatically increased,” says a shop owner who runs a franchise chicken store in Jamsil-dong, eastern Seoul.

In response to these rising sales, discount retail stores and the home shopping industry are hastily preparing marketing strategies aimed at sports fans. E-Mart is offering a midnight snack discount of 15 percent off on instant food products with the purchase of four instant foods. It’s also offering discounts on imported beer.

Homeplus also had sales on beer, chicken and seafood.

There are other options for people who don’t like being outdoors. Pubs with air conditioning are showing the Games. The Wolfhound, an Irish-style pub in Itaewon, central Seoul, is crawling with an energetic crowd of people.

Table tennis, fencing and swimming are being aired on the pub’s screen. Despite different nationalities, the sporting event seems to bring the expats together.

“I came here last weekend when the Korean football team beat Switzerland. My friends and I, who are from different countries, all cheered for Korea,” says a U.S. man who wishes to remain anonymous.

Some people are opting for other venues.

“I’m considering watching the men’s quarterfinal football match with my co-workers at a jjimjilbang [public bathhouse],” Choi Jin-sung, 32, a Nowon resident says. “We will make bets on the game, and the winner will buy lunch for our team.”