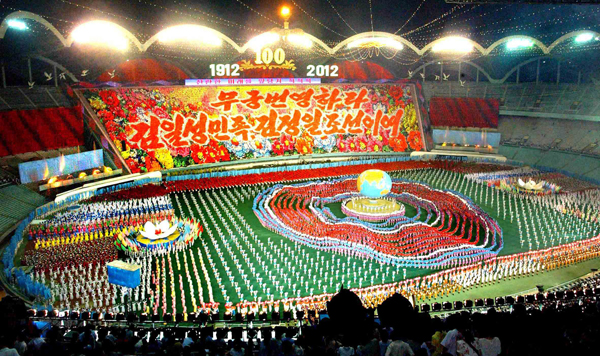 North Koreans perform during the grand gymnastic and artistic festival “Arirang,” winner of the Kim Il Sung Prize, at the May Day Stadium on Rungna Island in Pyongyang on Wednesday, in this picture released yesterday by the North’s official KCNA news agency. [YONHAP]


North Korea has begun its Arirang Festival, or Mass Games, which sees thousands of choreographed dancers praising the Kim dynasty.

They are celebrating even though the country has seen large losses of life due to flooding and other natural disasters.

The 40-day-long, large-scale propaganda spectacle started on Wednesday in the May Day Stadium in Pyongyang and will run until Sept. 9, the North’s official Korean Central News Agency reported.

The state media said that the festival “was praised by the audience, expressing a consistent sense of national sentiment with highly artistic skills.”

The first day of the show added a new part of a flip-card mosaic animation praising the new leader Kim Jong-un’s rule, the state television showed.

Pyongyang hosted its second games in 2005, but in 2006, they canceled it due to large-scale flooding.

Since 2007, the show has been held annually to celebrate the people and the military of the communist regime.

The KCNA reported yesterday that the North has had torrential rains in the western and eastern coastal regions on Monday and Tuesday and there are at least 31 casualties and 16 injuries reported.

The state media said on Saturday that there appeared to be at least 88 casualties, 134 injuries and 63,000 refugees due to week-long flooding in mid-July.

A group from the United Nations visited the regime for on-site investigation into damages.