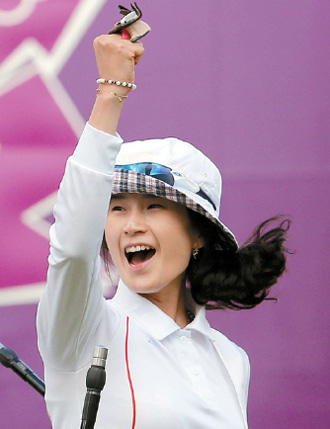 In the decisive overtime shot, archer Ki Bo-bae drew back the bow and watched the arrow hit the 8-point ring, drawing gasps from the crowd at Lord’s Cricket Ground. She put her head down, knowing the next minute would be one of the most important of her life.

The gold medal was now in the hands of Aida Roman of Mexico, who had come from behind to force the one-shot shootout and could pull off the upset with a shot closer to the center. Korea’s longtime dominance in the sport, which has faced growing competition over the years, hung in the balance.

Ki couldn’t watch, but heard the crowd’s reaction and felt the grasp of her coach, Baek Wong-gi. Roman had struck the 8-point ring as well, but her shot was further from the bull’s-eye.

“When I saw the electronic scoreboard, her arrow was further than mine and I breathed a sigh of relief,” Ki said after the event.

The nail-biter individual final Thursday night Korea Standard Time added to Korea’s gold medal collection at the 2012 London Olympics. The country’s seven golds is the third best behind only China and the United States as of yesterday evening.

Korean archers have now raked in two golds and one bronze at London so far, where a total of four gold medals are up for grabs in the sport. Korean male archers, who took the bronze in group competition, were scheduled to compete for the remaining gold medal in the individual competition slated for late last night.

Korean archers have won 18 Olympic gold medals since the 1984 Los Angeles Olympics, 14 of which were won by women. Korea’s lady archers have won gold medals in the individual competition during seven of the eight previous Olympics. The only failure was at the 2008 Beijing Games, when Park Sung-hyun lost to China’s Zhang Juanjuan by one point.

Ki, ranked second in the world, also won a gold medal in the group competition earlier this week with teammates Lee Sung-jin and Choi Hyeon-ju. Lee was knocked out in the quarterfinal and Choi in the Round of 16 in the individual event.

Ki could have clinched a gold medal with a draw in the fifth, and the two both recorded 9-9 with the first two arrows. Roman shot a 9 in her last attempt, and Ki shot an 8, forcing the game into a shoot-off.

“I thought 80 percent to 90 percent, she would lose,” said coach Baek, referring to Ki’s eight-point shot in the shoot-off. “But, I didn’t give up hope. It is said that which color of an Olympic medal you would win is up to God and it seems like fate was on Bo-bae’s side this time.”

Ki is a late bloomer. She won three titles at national youth championships she attended as a middle school student, but failed to make it on the national team for several years. She only qualified for the team in 2010 after graduating from college, where she corrected her shooting timing and posture.

But, she failed to win a medal in both individual and group competitions at the World Archery Championship in Turin, Italy, last year. It was the first time that Korea lost a gold medal in the women’s events at the World Championships since 1985.

“After tasting the failure at the World Championships, I thought I would start all over again. I was sorry for my senior archers,” Ki said.

Lee Woong, the Korean coach of the Mexican archery team, congratulated Ki’s victory, but he also celebrated Roman’s silver medal. It was the first archery medal for Mexico. Mariana Avitia, another Mexican female archer, also won a bronze in the individual competition.

Lee said Korea’s dominance in archery is no longer certain as he and other Korean archers are spreading keys to success in other countries. A total of 12 countries competing in archery at the London Olympics, or almost 30 percent of all 40 participating countries, are under the management of Koreans. The other country competing for a medal in the women’s individual event, the U.S., was also led by Korean coach Lee Ki-shik.

“The level of the world’s archery teams has been quickly equalized, and now it’s only a difference of a sheet of paper,” the Mexican manager Lee Woong told reporters after the final.