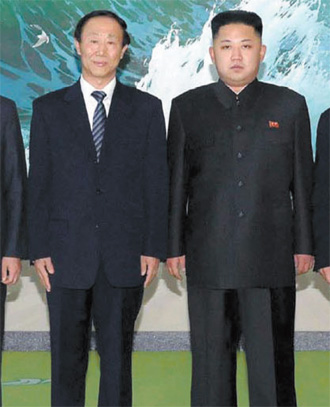 North Korea’s leader Kim Jong-un met with top Chinese officials yesterday in Pyongyang in what was his first reception of a foreign delegation since taking power after the death of his father.

According to China’s official Xinhua News Agency, Kim told Wang Jiarui, head of the Communist Party’s international liaison department, that the top priority of the regime is to improve the local economy so that North Koreans can enjoy “happy and civilized lives.”

The North’s Korean Central News Agency said that both sides had a “warm and friendly conversation,” but did not elaborate on the dialogue.

Xinhua News Agency reported that Kim and the Chinese officials discussed developing diplomatic ties between two countries and quoted Kim as saying it was the “unswerving will” of North Korea to deepen the bilateral friendship.

Kim Jong-un’s wife, Ri Sol-ju, did not appear in KCNA broadcasts of the meeting.

The Chinese news agency reported that Wang asked the young leader to expand mutual cooperation with China on major domestic and international affairs in Northeast Asia, including the maintenance of peace on the Korean Peninsula.

Neither the Chinese nor the North Korean news agencies mentioned whether Kim would make his first official visit to China or whether Kim will resume the stalled six-party talks.

Speculation is high that the young leader appears be turning his attention to foreign affairs and beginning diplomatic ties with the North’s closest ally. When Wang, who is considered a messenger between the two countries, made his visit to Pyongyang in 2010 when the late leader Kim Jong-il was in power, he reportedly discussed current inter-Korean affairs, such as the six-party talks. Three months after Wang’s visit, then-leader Kim took a trip to Beijing.

“So it is highly expected that Kim and Hu Jintao will possibly meet with each other this fall, especially ahead of the Russia-held Asia-Pacific Economic Cooperation.”

At his first solo diplomatic debut, North Korean leader Kim was accompanied by a string of officials. Professor Kim pointed out that Kim Yang-gon, a ruling party secretary who is in charge of dealing with inter-Korean cooperation and who accompanied late leader Kim Jong-il to the 2007 inter-Korean summit, was present.

“Recently, Secretary Kim frequently appears to accompany Kim Jong-un at many official events, raising speculation that the leader has much interest in recovering the inter-Korean cooperation and learning about current affairs in the South.”