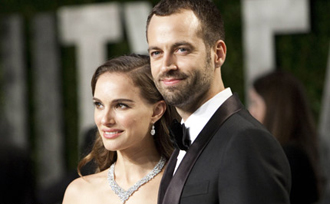 The traditional Jewish wedding was held Saturday evening in the Big Sur coastal resort, some 390 kilometers (240 miles) northwest of Los Angeles, according to the magazine.

Photos leaked on microblogging site Twitter showed a grinning Portman in a tea-length, A-line dress with a sheer overlay that covered her arms and shoulders, and a long veil, in keeping with Jewish custom.

The dress was designed by Rodarte, a label run by two of Portman’s long-time friends, and the company behind her purple Grecian-style Oscars gown in 2010.Millepied wore a blue tuxedo, People reported. The vegan meal - following the actress’ preferences - skipped the wedding cake and ended with French macarons: rich, typically meringue-based confectionery.