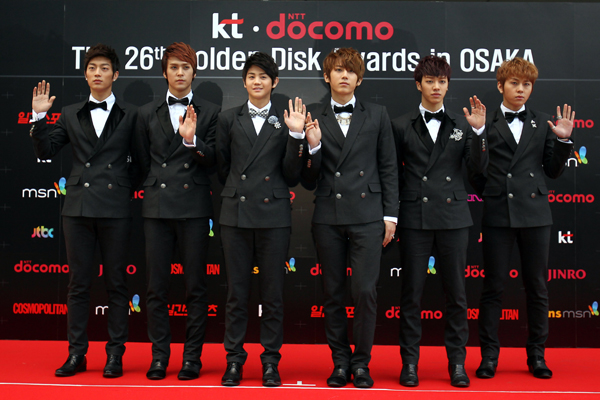 
K-pop boy band Beast held a fan meeting in Japan on Wednesday at the Saitama Super Arena in Tokyo that attracted 24,000 members of “Beauty,” an official Japan-based fan group.

The six members of Beast were dressed in Olympic colors and performed a total of 12 songs including their latest single “Beautiful Night” as well as the Japanese version of “Bad Girl” and “Fiction."

Beast kicked off the festivities with its Japanese debut single “Shock,” which ranked second on the weekly Oricon, a prominent Japanese music chart.

Following the singing, a talking forum took place during which members causally talked about their daily lives and other issues.

Beast revealed at the event that it will tour Japan starting Oct. 11 in Sapporo. The band plans to visit five cities - Osaka, Hiroshima, Nagoya, Fukuoka and Tokyo- - and perform 12 concerts throughout the month.

Beast has also been topping local music charts. Its latest single “Beautiful Night” was recently listed as No. 1 on the hit music show “M Countdown.”