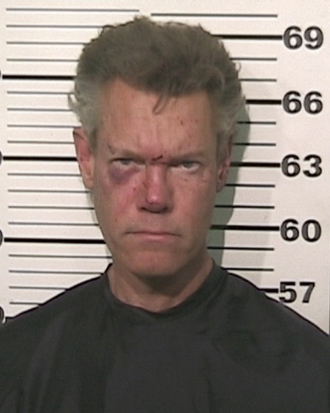 DALLAS - Country singer Randy Travis was charged with driving while intoxicated and threatening law officers after he crashed his car in Texas and was found naked and combative at the scene, officials said.

The accident was reported Tuesday night, and Travis walked out of jail Wednesday morning wearing scrubs, no shoes and a University of Texas baseball cap. It was the second Texas arrest this year for Travis, who was cited in February for public intoxication.

A Pontiac Trans Am registered to the 53-year-old singer had veered off a roadway near Tioga, a town about 60 miles north of Dallas where the entertainer lives, and struck several barricades in a construction zone, said Tom Vinger, spokesman for the Texas Department of Public Safety.

Vinger said Travis made threats against Texas Highway Patrol troopers and was not wearing clothes at the time of his arrest. The singer refused sobriety tests so a blood specimen was taken, he said.

“Travis had a strong odor of alcoholic beverage on his breath and several signs of intoxication,’’ according to a statement from the Grayson County Sheriff’s Office. “While Travis was being transported, Travis made threats to shoot and kill the troopers working the case.’’

A Travis representative said there would be no immediate comment on the arrest. A message left Wednesday with the Grayson County District Attorney’s Office was not returned.

Travis, whose suffered facial bruises in the crash, was released on $21,500 bond Wednesday morning from the jail in Sherman, Vinger said. Blood-test results are pending.

In February, Travis was charged with public intoxication after being spotted in a vehicle parked in front of a church.

He also has been involved in messy court proceedings with his ex-wife. Travis was divorced from Elizabeth Travis in 2010 after 19 years of marriage. Earlier this year, Elizabeth Travis, who had been his manager for more than three decades, filed a lawsuit claiming that Randy Travis made it impossible for her to do her job and terminated her management contract without proper notice. AP