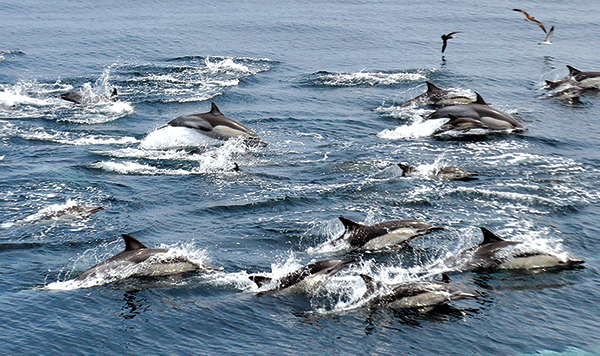 A pod of dolphins swims in the waters off the southeastern coast of Korea. [YONHAP]


Whale watching has become increasingly popular across the world with tours offered that venture into the Pacific Ocean from the United States and the Great Australian Bight from Melbourne.

While you won’t be catching glimpses of mammoth humpbacks, there are similar places in Korea that offer the chance to see the marine life living off the peninsula.

Ulsan, a city on the southeastern coast, allows visitors the chance to see up close false killer whales, minke whales and dolphins through its cruise tour.

The city’s Nam District Office commenced the whale-watching tour in July 2009 and has operated a cruise ship that travels from Jangsaengpo Port to the coastal waters off the southeastern coast for three hours.

The tour doesn’t promise visitors a glimpse of whales and dolphins as the weather and a number of other variables can affect the mammals’ patterns, but there are ways to increase your chances.

“Paths will most likely cross whales if visitors come in July, when the seawater is at an appropriate temperature for whales to appear. The probability is one out of three during the period,” said Hwang In-sook, an officer at the district office.

Still, Ulsan doesn’t want to let the less fortunate tourists down and offers free tickets for the Jangsaengpo Whale Museum.

The museum is the first and only one dedicated to whales in Korea and displays a collection of more than 250 artifacts from whalers. Whaling ships had operated until 1986 but rapidly vanished after Korea banned the practice.

The museum also houses an aquarium that has five dolphins in total.

Other cities, including Pohang, South Gyeongsang, and Jeju, once sought to jump onto the whale-watching bandwagon by kicking off inspections around the coastal area. Up until now, however, Ulsan is the only city that actually operates a whale-watching tour.