Beyonce sings at the United Nations

Beyonce sings at the United Nations 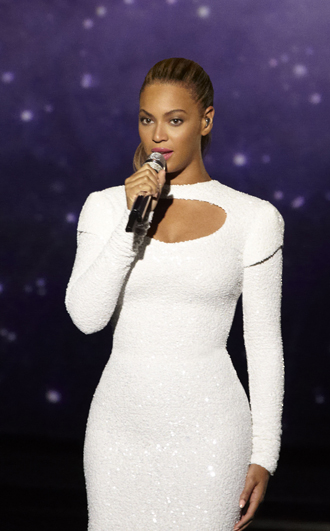 United Nations: Who runs the world? On Friday, it was Beyonce.

The U.S. pop star took to the stage in the UN General Assembly hall, normally reserved for world leaders, to film a music video that will be released on Sunday to mark World Humanitarian Day.

Beyonce - whose hits include “Who Run the World (Girls),” “Single Ladies (Put a Ring on It)” and “Crazy in Love” - performed her 2011 song “I Was Here,” a ballad written by Diane Warren about leaving your mark on the world.

“We all see the headlines and we think, what can I really do to help?” Beyonce said in a statement.

“World Humanitarian Day is an opportunity for all of us to work together to make a difference. This is our time to leave our mark on the world and show that we were here and we care,” said the Grammy Award-winning singer.

The UN event was a rare performance by Beyonce since she and her hip-hop mogul husband Jay-Z welcomed their first child in January, daughter Ivy Blue.

Instead of ambassadors and world leaders, some seats in the UN General Assembly hall were filled by celebrities including actress Julia Stiles, model Alek Wek and rapper The Dream. Beyonce met UN Secretary General Ban Ki-moon during rehearsal.

The music video, donated by Beyonce and Warren, will launch a global campaign that hopes to reach one billion people and encourage them to pledge online at www.whd-iwashere.org to do something good for someone in need.

Illustrations on Beyonce’s Web site, www.beyonce.com, suggested a few ways people can leave their mark - draw a small animal and tell it all your secrets, make food and share it with others, and dance like children who don’t know the rules.

“I hope everyone will pledge to complete at least one humanitarian action - however great or small,” said the UN humanitarian chief, Valerie Amos, in a statement.

“Together we can create an unprecedented awareness of the plight of people affected by crises around the world.”