Pyongyang has exaggerated damage reports after floods swept through the North in an effort to receive a larger amount of international aid, a South Korean government official told the JoongAng Ilbo yesterday. 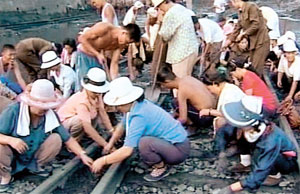 The South Korean government official said there is a wide discrepancy between the number of casualties reported by Pyongyang and the actual total.

On Aug. 4, the North’s Korean Central News Agency reported at least 169 deaths and 400 missing for June and July in total. The regime’s mouthpiece also said it recorded a maximum of 442 millimeters (17.4 inches) of precipitation during July.

However, the South Korean government has said it is skeptical of that death toll given previous records of flooding. In 1995, one of the worst years of flooding in the North, a maximum of 1,092 millimeters of precipitation between July 31 and Aug. 18 was recorded. The North reported 240 casualties.

In the summer of 2011, after a maximum of 564 millimeters of precipitation over nine days, the regime reported 56 casualties.

“The precipitation of the recent flooding was less than half of that seen in 1995, but the number of fatalities is triple of that in 1995,” the official said, referring to the recent report of 169 dead and including the 400 missing. “That is hard to believe.”

The duration of the latest rainfall is also suspicious. In its first report on the flooding, the KCNA said the rainfall started in mid-July. However, on Aug. 4, the state media said it saw rain damage starting from late June. The South Korean weather agency said the North had suffered from a drought throughout May and June.

The response by Kim Jong-un has also been questioned. The KCNA reported on Thursday that Kim issued an order to help ravaged areas recover, but it had been already 10 days since the rainfall started. In 2006, Kim Jong-il canceled the Arirang Mass Games due to heavy rainfall, but this year’s performance is ongoing without any suspensions.