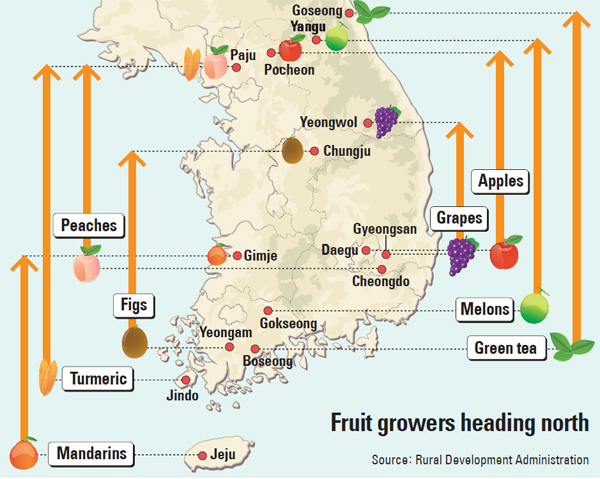 The changing climate is making it harder to identify the place of origin of fruit and other agricultural products as farmers sprout up in nontraditional regions to capitalize on the unusual weather patterns.

Jeju, which is prized for its subtropical conditions, has long been known as the home of mandarins, while sweltering Daegu on the west coast is the nation’s main producer of apples. However, soaring temperatures have caused farmers and their fruit and grain crops to migrate further north in recent years.

According to Statistics Korea and Rural Development Administration yesterday, mandarins that used to be raised only on Jeju, began taking root in South Jeolla in 2005 and South Gyeongsang in 2007. More mandarins and peaches are also being grown across the country due to the warmer weather conditions.

The ideal breeding temperatures for peaches are between 11 and 15 degrees Celsius (51.8 and 59 Fahrenheit), one of the reasons why Cheongdo, a county in North Gyeongsang, has been their traditional base. However, they are now just as likely to be found in Gangwon, near the east coast in the north of the country. Peach plantations more than tripled in total area from 1,184 hectares (2,925 acres) in 1990 to 3,743 hectares this year. Grape farms are also packing up and heading north to Gangwon as temperatures rise, causing production of the fruit to sag 40 percent in North Gyeongsang.

Now tropical fruits like mangos, dragon fruits and avocados are replacing mandarins, peaches and other subtropical fruits in the southernmost parts of the country. Plantations dedicated to the new crops expanded from 30 hectares in 2001 to 250 hectares last year. “The government needs to study ways of improving the variety of existing fruit plantations and adopt more niche crops,” said So Kyoo-ho at the National Academy of Agricultural Science.

“We urgently need policies that encourage the formation of plantations for certain crops by region,” said an official at Statistics Korea. “The country is also in need of technologies that can help each region maintain its specialty crops and fruit in response to the impact of global warming.”