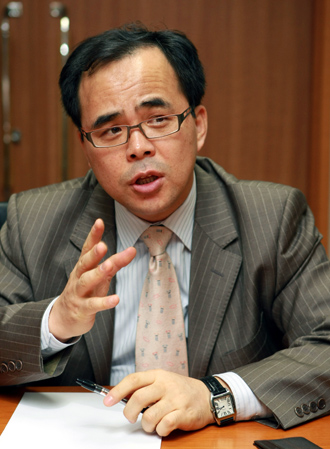 Kim Chong. President of the Association for Industry of Sport in Asia

Korea’s initial goal for the 2012 London Olympics, which wrapped up early Monday morning (Korea Standard Time), was to collect 10 gold medals and finish in the top 10 gold-medal standings. But the country got a happier-than-expected ending as it matched its Olympic record of 13 golds to rank fifth behind the seemingly unassailable triumvirate of the United States, China and Russia in addition to the host Great Britain. Korean athletes also pulled in eight silver and seven bronze medals at the 30th Summer Games. This was Korea’s second-best finish on the Olympic stage after it finished fourth at Seoul 1988, when it enjoyed roaring home crowd support.

The result in London was also music to the ears of Korean corporate sponsors of sports such as fencing, shooting and archery, which proved veritable medal reservoirs and helped boost the companies’ respective brand images. Kim Chong, president of the Association for Industry of Sport in Asia (AISA), said this will likely spur more local companies to invest in sport marketing.

But Kim, who was recently appointed the dean of the College of Physical Education at Hanyang University, said the country’s sports industry still has gaping deficiencies and needs to raise more talented personnel to develop. The 50-year-old professor has held various positions involving sports marketing and management and has worked as an advisor for projects with the government and various sports organizations. He also serves as the vice president of the Korea Sport Society, and received an official citation from the Prime Minister’s Office in 2004 in recognition of his efforts.

On Monday, the Korea JoongAng Daily sat down with Kim to discuss the impact of the London Games on the local sports industry.

Q. What are your thoughts after watching Korea’s performance?

A. I realized that Korea is really a strong country when it comes to the Olympics, but I still doubt whether it is strong in terms of sports generally. I still think our sports infrastructure, including sports played at schools and recreational sports centers, are not at the level of other advanced countries. The reason Korea can perform well at the Olympics is because we are skilled at concentrating on certain sports that we are good at.

What do you think of local companies throwing their weight behind less popular sports like fencing and shooting?

I see this as a positive trend because in the past, companies supported the sports and teams suggested by the government, but now they are doing it on their own initiative. Also, because the athletes these companies sponsored did well [some even cited financial support in attaining their medals], this in turn lead to more investment from the business sector. Of course, it will become a problem if companies only support sports where medals are expected, but I think we can fix this by putting in place concrete rules and implementing a fair system.

Some critics say these so-called “unpopular sports” are too dependent on corporate funding. Is this the case?

Korea’s per capita income exceeds $20,000, but we still don’t have the sports facilities to properly compete internationally, so most government funds are used to build them. This, however, has left many sports undeveloped. But companies are now plugging that gap, which they see as an extension of their corporate social responsibility.

Will people still care about these more marginal sports once the Olympic flame is extinguished?

There is a need to continue interesting events in the future. Fencing, for example, won a lot of fans in London thanks to all the dramatic matches we saw, and many people may now want to practice fencing or watch it in the future. But to expand that fan base, the local fencing federation needs to host international events or other special tournaments to keep its momentum going. Who wouldn’t want to see a rematch between Shin A-lam and the German fencer who beat her at the Olympics because of that controversial timekeeping error?

After keeping fans hooked, we can then work on expanding recreational sports programs and building related facilities. Local companies can also help this way, too.

How does Korea’s sports industry rank in Asia?

I think we’re behind Japan and China. We’re also lagging in terms of sports merchandising as we don’t have a major international brand like Mizuno or Asics of Japan. We also lack good sports marketing. I think our athletes have reached a high level, but we lack the sort of management and operating skills to set up a good business model.

You were re-elected as AISA’s president early this year. What’s in the pipeline?

I want to position Korea at the core of Asia’s sports industry. In 2007, we created an act to promote the national sports industry, and as far as I know Korea is the only country in the world to have such a law. Some countries are already using our development as a benchmark. If Korea stood at the center of Asia in this field, we could send our sports industry professionals to other countries and strengthen our network in Asia.

Will Koreans’ passion for sports continue to grow?

As their income grows, the money injected into the sports and leisure industries will also rise. The local sports industry is estimated to be worth 30 trillion won ($26.58 billion), but I think this figure could top 50 trillion won within a decade as more companies invest in sports, and as the popularity of professional sports like baseball, football and basketball continue to grow. This industry will serve as a sea of opportunity for job seekers. We need more professional workers, so it’s important to support education institutions to produce candidates of the right caliber to make better use of our already strong athletic ability.