Celebrity couple back in friend zone

Celebrity couple back in friend zone 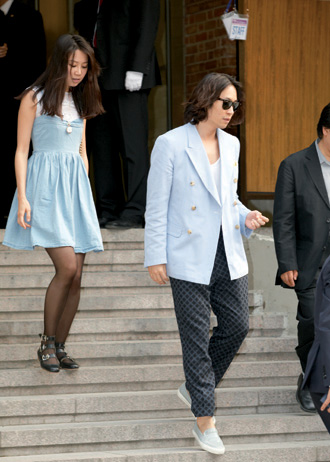 One of the nation’s most prominent celebrity couples has decided to call it quits after 10 years.

She also denied the rumor that she was involved with her co-star Ha Jung-woo from “Love Fiction.”

“It’s so frustrating that people assume that I’m seeing Jung-woo. Really, if you need a reason, it’s because I just wanted to take some time off from being in a relationship.”

Kong said that the two will remain as friends, as they’ve been each other’s best friends and supporters in the industry. On Ryu’s birthday last week, Kong said that she contacted him to wish him all the best.

Kong and Ryu were elementary school friends and became lovers after starring together in the 2001 SBS drama “Wonderful Days” as well as in the movie “Conduct Zero” (2002). In 2003, they broke up for a while but got back together in 2006.