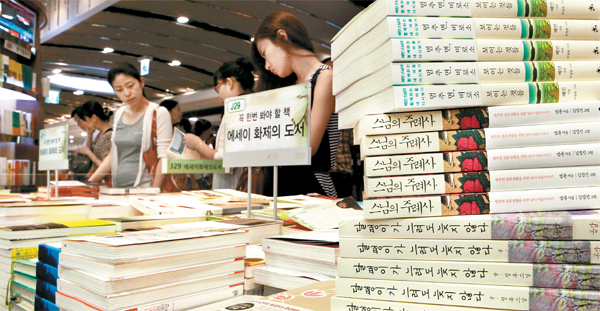 The Kyobo Bookstore in Seoul and others across Korea have been brimming with Buddhist-written books. Among 100 best-selling books in the first half of the year, six of them were written by monks. By Park Sang-moon


As the daughter of a Christian clergyman, Ahn Jae-eun was at Sunday worship services with her parents even before she was born. So when she received a book from a friend of hers that was written by a Buddhist monk, she just laid it unopened on her desk along with her other books.

It didn’t take long for her to realize that the book, “What You See When You Take a Break,” was a best seller, so she started to read it, thinking that it might help her when she sits for an essay test later in the year. But as a devout Christian, the book surprisingly comforts her.

“I sometimes need words of wisdom, and then I read the book along with the Bible. It is quite helpful,” says Ahn, who’s been preparing for a national college entrance exam for three years.

It took just one year for many of her friends to enter college, but she has failed twice and with less than 100 days remaining until the examination, she often has feelings of insecurity.

Written by Venerable Haemin, the collection of essays titled “What You See When You Take a Break” has sold more than 900,000 copies.

Published in January, the book stayed atop the best-seller list for 13 weeks between May and July.

Kyobo Bookstore’s list of the 100 best-selling books in the first half of the year is testament to a phenomenon that most readers are aware of: the Buddhist invasion. The gray-robed religious leaders have been dominating Korea’s publishing industry of late.

Along with “What You See When You Take a Break,” five other books by two Buddhist monks and a nun are among the100 best sellers of the year.

“Since the nation’s publishing industry has been stagnant for so long, we call a book a hit if it sells 10,000 copies,” says Hwang Eun-hee, who is responsible for promoting Venerable Haemin’s book at Sam & Parkers publishing.

The book still holds the No. 2 best-selling title at Kyobo Bookstore, the nation’s largest. 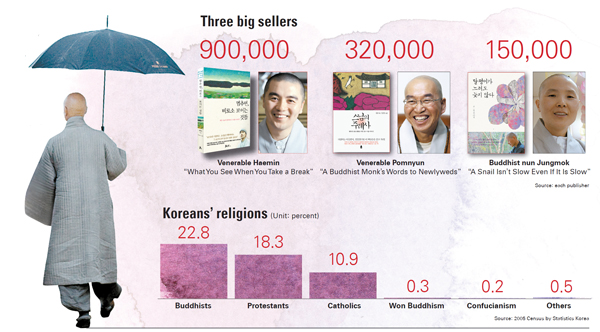 Regardless of age, gender or religion, Koreans seem anxious to soak up wisdom from Buddhist monks.

Venerable Haemin is a Harvard graduate who teaches religion at Hampshire College in Massachusetts. Though the elite Buddhist monk spends most of his time in the United States, he stays connected with Koreans via Twitter, on which he has 220,000 followers.

His uncle-next-door-like tweets on topics ranging from work to relationships receive rave reviews from his followers, many of which were included in the book.

“People who don’t use Twitter had little knowledge of him before the book came out. So we just expected the book would sell between 50,000 and 100,000 copies, but it went viral and now we see diverse groups of readers from high school students to people in their 40s and 50s,” says Hwang at Sam & Parkers.

Another Buddhist literary star is nun Jungmok, whose collection of essays titled “A Snail Isn’t Slow Even If It Is Slow” addresses how to cope with everyday issues such as love, health and happiness. She has been hosting a radio show on the Buddhism Broadcasting System for eight years.

Perhaps the most prolific of the Buddhist writers is Venerable Pomnyun, who has published four books this year and last year. Among the titles is “A Buddhist Monk’s Words to Newlyweds.”

Venerable Pomnyun has been holding ceremonies across the country during which he receives questions from followers and offers words of wisdom on the spot. His advice and thoughts constitute the basis for his books.

He is known as a mentor to Ahn Cheol-soo, who is considered a strong potential presidential contender in the upcoming December election. The software mogul-turned-educator is dean of the Seoul National University Graduate School of Convergence Science and Technology.

Although Buddhism is the oldest religion in Korea with a history that dates to the fourth century, there are more Christians (Catholics and Protestants) in the country as of 2005.

According to Statistics Korea, 22.8 percent of Koreans identify themselves as Buddhists and 29.2 percent as Christians (18.3 percent Protestant and 10.9 percent Catholic).

Considering those figures, the rise of books written by Buddhists is a noteworthy publishing and social trend.

“It seems like many books written by Buddhist monks were on the best-seller lists this year,” says Jin Young-kyun, who works in public relations at Kyobo Bookstore.

The best sellers include not only books by Korean monks, but last year’s “How to Empty Your Mind” by Japanese monk Ryunosuke Koike.

Experts say the popularity of books written by Buddhists can be linked to the hottest buzz word these days: healing.

Indeed, concern with healing can be found everywhere. It seems “healing” is added to everything from spas to tour packages to restaurant menus to television talk shows.

In response to the rise of healing and Buddhist books, “there is a tendency for people to resort to religious leaders when they are having financial difficulties,” says Lee Na-mi, a psychiatrist who owns and runs a clinic in Seocho-dong, southern Seoul.

“In addition to that, materialism has been prominent over the past years. Now people are inclined toward spiritualism as a way to strike a balance with materialism,” she says.

Books written by Buddhist monks were popular in late 1990s during and after the Asian financial crisis. That is when the books of Venerable Beopjeong, who practiced non-possession, and Venerable Sungchol grabbed the public’s attention.

“One day I left a tweet while I was eating my ramyeon and told my Twitter followers that we should love ourselves even if we eat a humble instant noodle,” Venerable Haemin told JoongAng Ilbo.

“Feedback to the mention was explosive. It was quite shocking, and I realized people really need someone who can give them a pat on the shoulder.”

In fact, many Koreans deal with insecurity these days. There are high unemployment rates, falling home values and soaring commodity prices. All situations have their own unique issues, and many people left reviews on blogs and Web portals that books of Buddhist monks healed their inner selves.

Kim Ji-ho, a professor of psychology at Kyungpook National University, has a different take on the prevalent healing trend.

“People used to care what they eat and what they consume. It was a well-being trend. But they are mature enough to think about their mental health as well,” says Kim.

Looking at the trend, one question naturally pops up. Among many religious leaders, why monks?

Han Gi-ho, head of the Korean Publishing Marketing Research Institute, has an answer.

“Books written by pastors make people somewhat uncomfortable because they don’t accept people who have different thoughts than them,” says Han.

“There used to be many good books written by Catholic fathers, but now it is hard to find books written by them. That’s how books by Buddhist monks stepped in. They have a little touch of Buddhism. In addition to that, these books are not talking about a great enlightenment; they speak to readers as if they are friends of the readers.”

Many readers have similar views about Buddhist-written books. A netizen who goes by Sweetmanyo wrote, “I’m Christian, but the words of Venerable Haemin comforted me a lot.”

Another Internet user with the ID Heather wrote, “I’m an atheist so I never read books written by religious leaders, but this one was different. I felt like I was cured by his words.”

These are a couple reviews out of the thousands turned up by a search for Venerable Haemin’s “What You See When You Take a Break.”

“But for now, it seems as though many people are addicted to these types of healing words.”