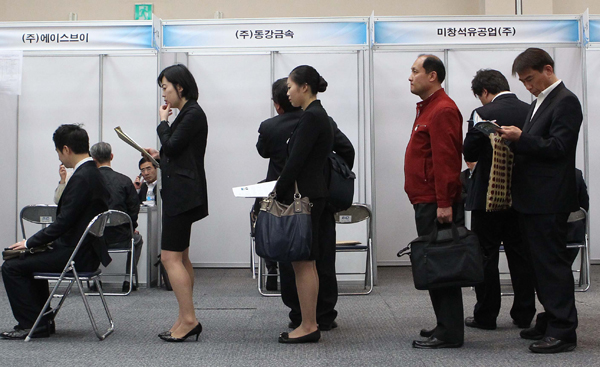 Job applicants with work experience line up for interviews at a job fair held at a Busan government office earlier this year. Job opportunities for retirees are slim on the ground as many companies are canceling recruitment drives and scaling back their work forces. By Song Bong-geun


Companies are pushing forward with corporate restructuring as they already feel the pinch of a contracting economy caused by unresolved uncertainties, including the euro zone fiscal crisis, China’s economic downturn and signs of a slow recovery in the U.S.

Restructuring has not been seen on such a grand scale since the country experienced one of its fiercest economic challenges in the late 1990s when the Asian financial crisis blew up.

Four years ago, when Lehman Brothers went bankrupt and sparked a global recession, local companies adopted austerity measures to cut costs rather than downsizing their human resources. However, many are now facing an even bleaker situation and promising generous incentives to those who accept their offer of voluntary early retirement as they steel themselves for what could be a protracted economic deceleration.

But the biggest difference between the latest moves being made and those of over a decade ago is that the new focus is on taking pre-emptive measures with an accent on treading carefully to weather the storm.

Most companies are now handing out paychecks equivalent to two years worth of work to staff who opt to retire early, although the packages range from six months’ salary to 45 months’ worth.

“We have been pushing through with the voluntary retirement program, not because the company is in dire straits, but rather because we want to streamline to raise efficiency,” said a Korean Air employee. “That is why we are able to offer fat severance packages in addition to the regular retirement check.”

The nation’s leading airline in May accepted applications from 55 people who asked to retire early. It was the second round of corporate restructuring at the company since October.

GM Korea followed suit this year, with 120 people signing up for voluntary retirement in May and June. Some have already left with the equivalent of 24 months’ pay. It was the company’s first corporate restructuring since GM took over defunct Daewoo Motor in 2002.

GS Caltex waited even longer, streamlining in June for the first time in 14 years. But for employees it may have been worth the wait as their golden handshakes rang to the tune of 45 months’ pay.

NCsoft, the nation’s leading game developer, is giving 400 of its staff who applied for early retirement up to 12 months’ pay depending on how long they have been with the company. It is also a new first for the company. 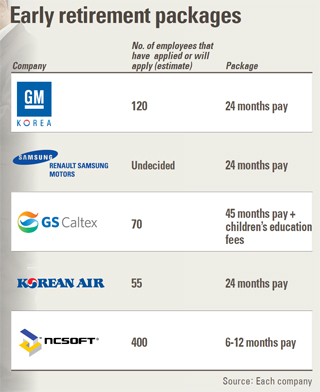 The latest firm to go down this road is Renault Samsung, which has seen its sales fall rapidly of late and plunge 32 percent in the first half compared to the same period last year.

With such generous paychecks being offered, even junior employees are said to be mulling over the deals, whereas older employees are generally more reluctant to part ways with their respective companies in light of how hard it will be for them to find another job.

“The annual wage of senior employees at a managerial level is around 100 million won ($88,500), which makes a two-year-salary golden handshake a sizable offer, but maybe not enough to provide a sense of security,” said an industry insider, who requested anonymity.

More retirees these days are looking to start up their own businesses to see them through their remaining years but even 200 million won is barely enough to get a new start-up off the ground. And whereas investing in the stock market or real estate was once considered a fairly safe bet that for many doubled their personal holdings, this is no longer tenable given the volatile state of the local bourse and the long-stagnating property market.

Moreover, in status-obsessed Korea, where people are often judged based on their job, having a business card at hand is usually considered preferable to telling others you are retired.

In contrast, younger workers tend to see this as an opportunity to extend their education, sign up for an MBA, or simply enjoy some time off while they hunt for a new job at a leisurely pace.

“The situation is very different from the 1997 financial crisis,” said Kim Jong-seok, a professor of economics at Seoul’s Hongik University. “The reason older people are hoping to stay put, even those surviving on minimum wage, is that they see no viable alternative. For them, finding another job could prove nearly impossible.”

The professor said that this highlights the frail state of the social safety net for older people. “There needs to be a system where elderly employees can more easily switch jobs or find new occupations thanks to improved state support,” he said.

In his view, companies should also strive to keep hold of the younger members of their work force. “It’s a major loss for a company when its young people leave,” he said.

Most of the companies undergoing corporate restructuring are now limiting applicants to manager-level employees. GM Daewoo and Korean Air said candidates must be older than 40 and have worked with them for at least 15 years, while Renault Samsung has barred its R&D and design teams from seeking early retirement.