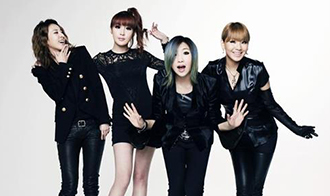 2NE1 will take part in a live Q&A session online on Wednesday via Facebook Live.

The K-pop girl group, currently in the United States, will visit Facebook headquarters in California for the 45-minute interview to be streamed live worldwide.

By doing so, the group will become the first-ever Asian act to be singled out by Facebook Live.

Others who have taken part in the live interviews are U.S. President Barack Obama, Madonna, Katy Perry and Oprah Winfrey, to name a few.

On its Facebook page, 2NE1 urged its fans, known as “Blackjacks,” to take part in the interview and ask questions; the feisty girl group of K-pop has more than three million Facebook followers.

Through the leading SNS Web site, the Korean band is set to talk about its first world tour as well as answer questions submitted by fans. 2NE1 kicked off its “New Evolution” world tour in Seoul on July 28 at Olympic Park.

The tour will see the girls travel to the Americas and Europe: seven nations and 10 cities in all.