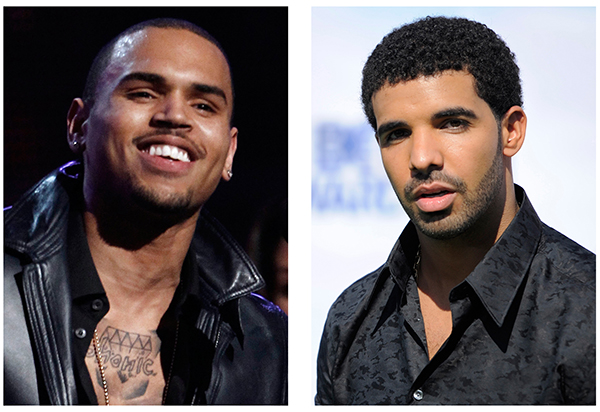 NEW YORK - Chris Brown and Drake were sued Wednesday over a bottle-throwing nightclub brawl involving their entourages, as a company with ties to the club sought to hold the music stars responsible for the melee.

Brown’s representatives had no comment about the $16 million lawsuit, and Drake’s representatives didn’t respond to a request for comment. The suit faulted the artists for - at a minimum - doing nothing to stop the June 14 melee and said it sullied the chic Manhattan nightspot’s name.

Brown and Drake should bear blame for a glass-flinging, broken-bottle-swinging free-for-all in a crowded club “in circumvention of the venue’s extensive security measures,” says the lawsuit, filed by Entertainment Enterprises Ltd.

The company owns the trademark for Greenhouse; the owners of the club itself aren’t involved in the lawsuit and declined to comment.

No criminal charges have been filed in the fight, which left Brown, NBA star Tony Parker and others injured. Police say the fracas started after members of Drake’s entourage confronted Brown on the dance floor as he was leaving the club’s basement lounge, called W.i.P. Drake’s representatives have said he was on his way out and didn’t injure anyone.

The lawsuit, however, points to news accounts of bad blood between Brown and Drake, both of whom have dated singer Rihanna. Entertainment Enterprises believes the two men instigated, encouraged or at least failed to stop the fight, lawyer Andrew T. Miltenberg said.

Because of publicity about the fight, a $4 million deal to license Greenhouse’s name for other clubs around the country fell through, the lawsuit says.

The current owners face suits over the fracas, including a $20 million claim from Parker.

The city shuttered the club for a time after the brawl; Greenhouse reopened July 10. It is continuing to fight a State Liquor Authority effort to nix its liquor license. AP