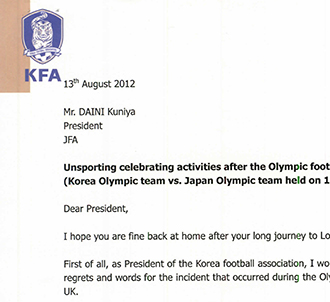 An official letter from Korea’s governing football body sent by e-mail to its Japanese counterpart about the behavior of Park Jong-woo, who carried a sign that read “Dokdo is our land” on the football pitch after Korea defeated Japan in the Olympics, contained several apologetic expressions.

Ahn said that he received the letter from the Ministry of Culture, Sports and Tourism yesterday morning “to ascertain whether the KFA actually has apologized because the country’s status would fall greatly if the association admitted Park’s behavior was a false move.”

Controversy arose on Tuesday after the association sent an e-mail to its Japanese counterpart to “explain” the details of Park’s behavior. The association told Korean media at the time that there were no expressions of apology or that Park’s behavior was wrong and it was necessary to resolve the misunderstanding so Park could receive his medal. Park was denied a bronze medal for his actions.

Japanese media reported on the following day that “the KFA made an apology to Japan.” The KFA immediately responded by saying that Japanese media had overanalyzed the letter.

First, the title of the official document is “Unsporting celebrating activities after the Olympic football match.” “Unsporting” refers to behavior that is not relating to or conforming to sportsmanship.

In the second paragraph, Cho says he “regrets” the incident. The third paragraph offers excuses, saying “It was just happened impulsively because he was enraptured from the winning [sic]” and “because they made history by becoming the first to be awarded bronze medal of the Olympic football games [sic].”

The KFA also promised the JFA that it will educate Korean players and coaching staff not to repeat such behavior at international-level matches. The kicker comes in the fifth paragraph, when the KFA almost begs for mercy, saying “Your kind understanding and generosity would be highly appreciated.”

In addition, many basic grammatical errors were found, casting doubt on the association’s international administration’s capability and raising speculation that the e-mail was sent hurriedly, without close scrutiny.