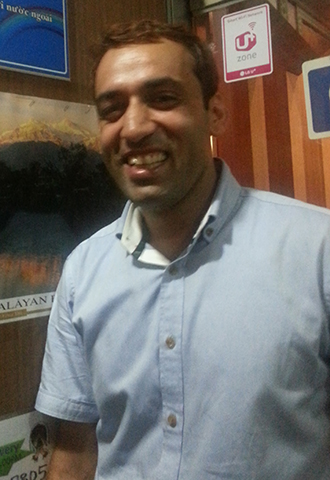 Namaskar in Jung District, Ulsan, is not an ordinary Indian restaurant. Besides serving Indian cuisine, it serves tourists in need of help. Providing lifestyle information, interpretation services and even tips to handle emergency situations, the restaurant is a well-known assistance center for foreigners.

Binod Chapagain from Nepal is the co-owner of the restaurant. Since 2009, he has operated an information center at one corner of the diner.

With 50 million won he raised by working more than 10 hours a day for five years in an automotive parts business earning 2,500 won per hour, he opened Namaskar in January 2009. Inviting his friend from Nepal as a chef, he became CEO of a franchise with two more restaurants in Nam District, Ulsan.

“When I just opened the restaurant, a Chinese tourist lost a passport and asked for help. After searching for two hours, we found the passport. The incident gave me an opportunity to open the center,” he said.

A couple from Qatar said in Korean, “We just visited Namaskar to ask about exchanging currency and about the best places to view the night sky.”

After gaining popularity among foreigners, it was designated as an official assistance center for foreigners by Ulsan Metropolitan Police Agency in 2010.

Since 2010, Chapagain has donated 200,000 to 300,000 won to search for immigrant workers and senior citizens who live alone. He helps out by delivering food, including fresh fruit.

Kwon Ji-hyun, a social worker from a social welfare center in north Ulsan, said, “I think Koreans should emulate his constant efforts in volunteering.”

Chapagain will be returning in five years to his home country, Nepal, where his family lives. He said, “After I repay the kindness of Koreans, I will return to Nepal and establish an orphanage with my family.”