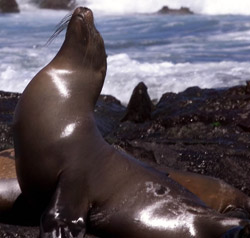 DAEGU - Documents showing that Japanese fishermen were charged taxes by the Ulleung Island county office for catching a sea lion near the Dokdo islets during the period prior to 1905 were discovered on Thursday. It supports the claim that Dokdo was under Korea’s jurisdiction at the time.

Yoo Mi-rim, the director of the Korea-Asia Cultural Institute, said, “In 1902, the Korean Empire required the governor of Ulleung Island to levy taxes on any economic activities, including Japan’s exports of sea lions, on Ulleung Island and Dokdo.”

The tax evidence was recorded in an administration manual from 1902.These detailed enforcement regulations were recorded and enacted after Prime Minister Yoon Yong-sun approved the duty. The document is 10 pages long and has a stamp from the Prime Minister.

The tax regulations include charging 10 percent on any marine products and one percent on freight that enters the island.

The taxes on marine products usually applied to seaweed from Jeolla and taxes on freight applied to Japanese’s exports.

The evidence shows that in 1902, the Japanese started fishing abalone in Dokdo, and they began hunting sea lions in 1904.

In 1901, during fishing season in Ulleung Island, up to 550 Japanese stayed on the island and 150 Japanese resided there year-round.

A document from the Japanese’s Foreign Ministry details exports of sea lions, squid and seaweed in 1904 to 1905. In 1904, skin and oil from 20 sea lions were exported.

The amount of exports increased in 1905 with skin and oil from 411 sea lions.

Yoo explained, “The fact that Japanese paid taxes on catching sea lions means that they acknowledged Dokdo as Korean territory.” A pod of sea lions used to inhabit Dokdo, but they have now become extinct.