Although the title “cellist” was in front of Han-na Chang’s name for more than half of her life, the 29-year-old anticipates that she’ll appear more on stage standing on a podium rather than behind a cello for the next couple of years.

“I checked my diary recently and noticed that most of the scheduled concerts for this year and next are of me conducting,” said Chang during a press conference in Seoul early this month for the upcoming “Han-na Chang’s Absolute Classic.”

“I debuted as a conductor in Korea in 2007, but it’s this year that I really began working on an international podium.

According to Chang, the charm of conducting stems from the potential to make the music sound more “grand” by working with dozens of musicians playing different instruments.

“A soloist is always in a position to ‘give’ sounds. But a conductor always receives something back after giving instructions. Such a give and take feeling of a conductor provides me with the energy.”

With objectives to “provide young local musicians with more chances to perform on a stage while acting as a bridge to introduce renowned musicians to them,” as well as to “present amusing classical concerts to Koreans that don’t make the audience fall asleep,” Chang established the “Absolute Classic” festival under her name by collaborating with the Seongnam Arts Center in Gyeonggi in 2009.

Marking its fourth year, Chang focused the 2012 installment, which kicked off on Saturday, on fulfilling both of her objectives by inviting her cello teacher Mischa Maisky while choosing “Music & Story” as this year’s theme.

Programs for this year’s “Absolute Classic” include three concerts: Concert 1 featuring Igor Stravinsky’s “Petrushka” and Tchaikovsky Symphony No. 5, which were performed on Saturday; Concert 2 featuring Strauss’ “Don Quixote” accompanied by Maisky and “A Hero’s Life” on Aug. 25; and Concert 3 featuring Mussorgsky’s “Pictures at an exhibition,” Joseph Ravel’s “La Valse” and “Bolero” on Sept. 1. 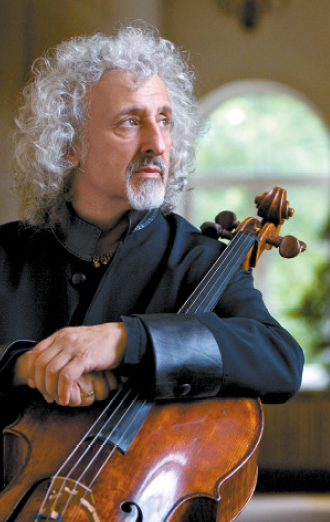 “It was my dream to perform together with my teacher Mischa Maisky but it’s difficult because there are not many repertoires for two cellos. But as a conductor, I am finally fulfilling my dream,” Chang said.

He said that he would be glad to be on the same stage as Chang “anytime, anywhere.”

“I’m so honored to perform with my teacher and at the same time I’m glad to be acting as a bridge to offer young local musicians the chance to form a relationship with such virtuosos like Maisky,” said Chang.

When Chang was 10, she had her first lesson with Maisky and it was then that she “opened her eyes to the music world.”

“During the very first hour of my first lesson with Maisky, he taught me how to communicate with composers and understand their musical world.

“Before then, I would just practice hard by reading the scores, but ever since then, I began to understand that every composer has their own story and that the scores they created are not just scores they wrote for fun but through deep thoughts and agony.”

According to Chang, the theme of this year’s festival, “Music & Story,” is her answer to questions she had received from an audience that found it difficult to understand the story behind classical music pieces.

“The program for this year’s festival will have pieces with detailed storylines like ‘Don Quixote’ or pieces that have obscure stories like the Tchaikovsky Symphony No. 5,” said Chang.

“Ultimately, the message I want to convey through this year’s festival is that music doesn’t have a right answer and that people can still enjoy listening to classical music not knowing exactly what it’s about with their own imaginations.”

But to help audiences better understand the composers of the music that are included in the program, Chang decided to hold “pre-concert talks” for free, an hour each before concerts.

“Stories that are told verbally through language evokes certain feelings in the listener’s hearts, but music expresses the feelings. If you listen to sad music, before you even think that it is sad music you already feel that sadness,” Chang said.

“I want the audience to get familiar with such direct emotional appeals of music through the festival.”

Pre-Concert Talks are held an hour before each concert. For more information, call (031) 783-8000 or visit www.snart.or.kr