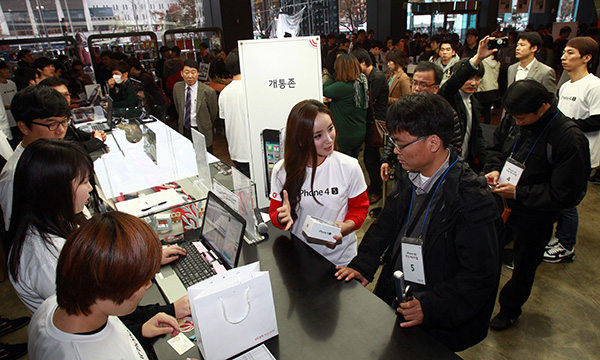 Customers open account for Apple’s iPhone 4S at the smartphone’s launch event hosted by mobile carrier KT at its headquarters in Gwanghwamun, central Seoul, on Nov. 11 last year. The next version of the iPhone is expected to hit the Korean market in October. By Kang Jung-hyun


The rumors are thick and fast that the new iPhone will make its debut as early as next month.

Locally, the big questions are when it will reach Korean shores and whether it will support the super-fast fourth-generation connectivity.

A flurry of news reports from around the world have been citing two different launch dates: Sept. 21 or Oct. 5. The predominant view is that Apple will throw an event to unveil the iPhone 5 on Sept. 12 in San Francisco and mobile carriers in the United States will start accepting preorders on the same day.

Actual sales will allegedly begin on Sept. 21 in the U.S. and on Oct. 5 - the first anniversary of the death of Apple co-founder Steve Jobs - overseas.

The theory is supported by recent remarks by the new presidents of troubled Japanese electronics company Sharp, which is a supplier to Apple. “Shipments [of screens for a new iPhone] will start in August,” Takashi Okuda, president of Sharp, said at a press briefing in Tokyo earlier this month after the company released its latest quarterly earnings. Sharp is one of three suppliers of the screens for the latest Apple device. The others are known to be Korea’s LG Display and Japan Display.

For the iPhone 4S, Apple unveiled it last Oct. 4, received preorders from Oct. 7 and started global sales on Oct. 14. In Korea, it went on sale Nov. 11.

Given that precedent, Korea is likely to get the next-generation handset, expected to compete against Samsung Electronics’ Galaxy S3, in October.

Two leading mobile carriers and Apple partners - SK Telecom and KT - are expected to sell the new iPhone. LG U+, the smallest local operator, has never sold an Apple mobile device and said it’s not ready to join the iPhone family.

“We might begin selling iPhones around next year,” said an LG U+ spokesman, “probably be the iPhone 5’s successor.”

The next iPhone, which originally debuted in 2007, is rumored to feature a larger and thinner display than previous incarnations, which all had 3.5-inch screens. The general consensus is it will be the first iPhone compatible with long-term evolution (LTE) connectivity. 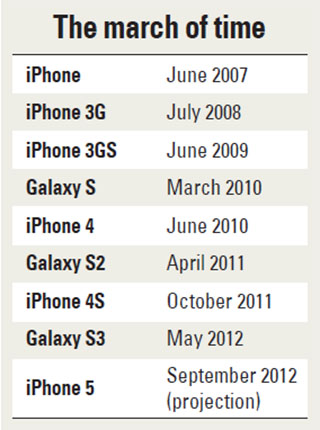 The key issue now is whether it will be compatible with Korea’s networks. Unlike the currently dominant 3G networks, whose frequency everywhere in the world is 2.1 gigahertz, different carriers around the world use varying frequencies for LTE.

In the U.S., Verizon, which has the largest number of LTE subscribers, uses a 700-megahertz frequency, while No. 2 AT&T uses both 700 megahertz and 2.1 gigahertz.

But in Korea, SK Telecom and KT use 800 megahertz and 1.8 gigahertz, respectively. Due to the difference, Apple didn’t offer Korean consumers LTE as an option on its latest iPad, offering only a 3G model.

Industry sources and some news reports say both KT and SK Telecom have dispatched staff to Apple’s Cupertino, California headquarters to persuade the U.S. partner into supporting their frequencies. Apple is famous for being highly particular about changing specifications of its products for specific companies or countries.

The negotiation process is “so confidential” that even the spokesmen for both companies could not confirm it.

“Apple’s policy is always to keep its mouth zipped when it comes to decision over new product release dates and related measures,” said a KT spokeswoman. “When they make a certain decision, they give us the notice only two to three hours before the official announcement.”

Whether the iPhone 5 will be able to be used on Korean LTE networks is crucial for the two carriers, which have poured trillions of won into building the next-generation mobile networks nationwide.

There are an estimated four million iPhone users in Korea, including one million using the iPhone 4S, and a sizable portion of those have remained royal, refusing to upgrade their handsets to LTE-enabled ones, such as the Galaxy S3.

If the negotiation with Apple fails and the new iPhone is released only for 3G networks, the carriers may face the prospect of many customers deciding they don’t need LTE. In addition, some existing LTE phone users could go back to 3G networks just to use the new iPhone.

Another possibility is that Apple selects a single carrier for its LTE model here, which would require only one modification.

If the iPhone is launched in September, it “could result in the final 10 days of the month generating six to 10 million iPhone 5 unit sales,” said Gene Munster, an analyst with Piper Jaffray, a U.S. investment bank, in a recent report. He further noted that Apple could sell 26 million to 28 million units in the September-November period.

By comparison, Apple archrival Samsung had accumulated global sales of its Galaxy S3 surpass 10 million units as of late July, just 50 days after the flagship smartphone went on sale globally.

Earlier in July, investment bank JP Morgan predicted that sales volume of the handset will reach 21.5 million units by the end of the third quarter.