The provincial government in Gyeonggi made a big fuss about cracking down on industrial espionage when it announced on June 28 that it would “immediately” expel Orbotech, an Israel-based automated optical inspection company, from an industrial complex in the province after its employees were found guilty of stealing corporate secrets.

However, it later came across as mere hot air and bluster, followed by little of substance.

The notice came a day after the Seoul Central District Prosecutors’ Office said it had arrested and indicted three Korean employees of Orbotech’s Korean subsidiary, and charged another three without detention. Prosecutors also pressed charges against the Korean subsidiary and said they would indict some employees from the company’s headquarters in Israel.

“The Gyeonggi government is willing to attract high-quality foreign investors to propel industrial progress and job creation, but will take bold and quick measures against companies that threaten the national interest ? such as Orbotech Korea ? by permanently expelling them,” said Gyeonggi Gov. Kim Mon-soo at the end of June.

All six employees are accused of stealing diagrams from Samsung Display and LG Display that depict active matrix organic light emitting diodes (Amoled) panels for 55 inch TVs, and then relaying them to key rivals overseas.

The global Amoled market in the next five years is estimated to be worth 90 trillion won ($79.25 billion) in five years’ time, according to industry sources.

Prosecutors have declined the name the companies as the case is ongoing, but said that both were former clients of Orbotech, while refraining from saying whether they are still doing business together for security reasons.

One spent 1.38 trillion won and the other 1.27 trillion won on developing displays for a cutting-edge, expensive TV that is set for mass production later this year, prosecutors said, adding that the leaked technology is Korea’s “valuable industrial technology, potentially valued at 90 trillion won.”

The six staff are believed to have sneaked in USB drives that look like credit cards and hidden cameras into the companies in order to pilfer the data. They hid their spy-like equipment in a variety of ways, including inside their shoes, belts and wallets, on several occasions from last November to January to escape detection, according to the prosecution.

The Korean subsidiary of the Nasdaq-listed company has been running a factory that produces optical inspection equipment for display panels on a 1,650-square-meter (17,650 square feet) plot of land in the Pyeongtaek-Hyeongok Industrial Complex for foreign investors. The plant was based on an investment of $1.6 million. To attract this level of foreign investment, the Gyeonggi government has been providing incentives in the form of tax exemptions.

Almost two months after the prosecution’s investigation kicked off, however, no tangible progress seems to have been made, despite the provincial government vowing to mete out tough punitive measures. Orbotech’s Korea office, located in Sungnam, Gyeonggi, has been operating as usual and the factory is also still running, according to its Korean publicity agent. She said no executives or employees from Orbotech Korea have been laid off to take responsibility for the spying charges. “As far as I know, a decision on whether to fire the employees who have been charged has not yet been made,” she said.

“Inevitably, some time is needed to go through all the steps required to nullify the contract,” said a spokesman for the Gyeonggi Urban Innovation Corporation, a public company under the Gyeonggi Government that takes care of the industrial complex.

When asked if the plant is still in operation, he said he did not know, adding that the provisional government has not yet even finished calculating the value of incentives it provided.

The first trial took place on July 10. An attorney for Orbotech Korea denied the charge, arguing that two issues must first be clarified: Whether the stolen information was intended for “internal use,” and whether it constituted “core technology in a true sense.”

Orbotech also said in a press release on June 28 that the company was “disappointed by the groundless allegations made by the prosecutor” and that it “denies any criminal intent.”

Industrial espionage is a thorny issue, particularly when employees at a tech company migrate over to a rival player. Such cases make it tricky to determine which came first - the job offer or the invitation to share coveted secrets.

In a separate incident, the Suwon District Prosecutor’s Office said on July 16 that it indicted without detention four LG Display employees, as well as an executive at one of its partner companies, and six researchers at Samsung Display, including some who had already left the company. They are charged with colluding to steal Samsung’s core OLED technologies for LG.

Samsung claims LG stole the technologies by deliberately poaching its researchers, adding that it cost the company several trillion won worth in potential losses. In response, LG argues that it is being wrongfully accused. It said scouting human resources should not be considered an act of espionage, and claimed that LG and Samsung use different technologies to make OLED screens.

“Samsung Display has been circulating misleading information through such means as press releases to make the case now under investigation seem as though it has been confirmed as a crime,” Lee Bang-su, an executive with LG Display, said on July 16.

“Technology theft should be strictly punished,” said a judge who is not linked to either of the aforementioned cases. “However, the court has no choice but to act prudently when making a ruling on people charged with industrial spying relating to a change of job within the same field, as it could potentially infringe on people’s right to choose an occupation,” added the judge, who declined to be named. 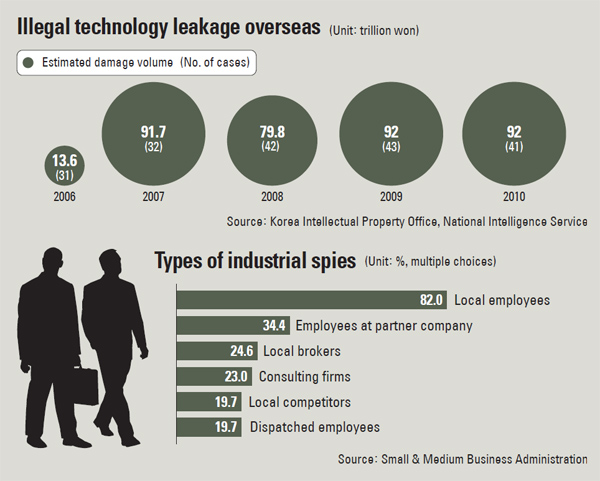 Not above the law

Under the former, a judge can hand down a prison term of up to 10 years and a fine equivalent to between two and 10 times the value of the perpetrator’s illicit gains.

But data from the National Intelligence Service show that of almost 927 people charged between 2006 and 2006, only 42, or 4.5 percent, were given prison terms. Some 34 percent were fined and 33 percent granted probation.

In general, the court is seen as handing out overly lenient penalties as it cedes ground to those who argue that the transfer of technologies among rivals in the same industrial sector is a common practice.

Industrial spies are usually a far cry from the slick professionals depicted in James Bond and Jason Bourne movies. According to the National Intelligence Service, 82 percent of those caught for espionage between 2005-7 were current or former employees of the company from which the information was leaked. Some foreign researchers and industrial trainees residing in Korea were also found to have stolen core technologies of the company they worked for overseas.

“The relatively light punishments make it hard to protect the valuable technologies that companies have spent years creating,” said Lim Yoon-chul, a former member of the national science and technology advisory board under the Ministry of Education, Science and Technology.

The second act in question is directly controlled by the Ministry of Knowledge and Economy as it applies exclusively to the overseas leakage of semiconductors and OLEDs - two internationally competitive tech sectors that the country considers part of its national wealth. Orbotech’s case falls under this category.

Since Korea has gained global leadership in a handful of industrial sectors such as TVs, semiconductors, smartphones, shipbuilding and steel making in recent years, attempts at stealing those technologies that require hefty expenditure and lengthy periods for R&D have surged.

American futurist Alvin Toffler predicted that industrial espionage would be on the rise in the 21st century as many companies want more information about the plans, products and profits of their competitors. He dubbed it “competitive intelligence.”

Samsung and LG are the world’s top two players in producing displays. In the first quarter, Samsung made up 30.8 percent of the global market by sales, followed by LG at 26.4 percent. The two companies’ OLED technologies are almost six years ahead of rival display makers in Japan, the United States and Europe, according to experts.

Choi Gee-sung, the vice chairman of Samsung Electronics, told employees in 2010, when he was serving as its president, that “tight security will be the key determinant of Samsung’s survival.” The tech bellwether bans photocopying and printing on its premises, and researchers’ computers switch on only after a specially designed card confirms the identity of the user. However, leakages abound as spying methods become ever more ingenious.

“Many cutting-edge technologies made in Korean are targeted for theft by sources abroad,” said a National Intelligence Service (NIS) official. A technological gap of less than three years can easily be caught up with the help of industrial spies, according to sources.

The NIS estimates that the damage incurred by industrial spying from 2006 to 2010 stood at around 400 trillion won, 20 percent more than the government’s annual budget.

“The recent leakage abroad of key technologies for 55-inch OLED TVs has caused R&D expenditure damage amounting to at least 3 trillion won .?.?. By stepping up the penalty, the bill aims to prevent such losses and boost international competitiveness,” he said.

In 1996, the United States implemented the Economic Espionage Act, which made the theft or misappropriation of a trade secret a federal crime.

In February 2010, former Boeing engineer Dongfan Greg Chung was sentenced to 16 years in prison when he became the first person to be convicted under the act. The Chinese employee was convicted of stealing Boeing’s trade secrets related to the U.S. Space Shuttle program and the Delta IV rocket.