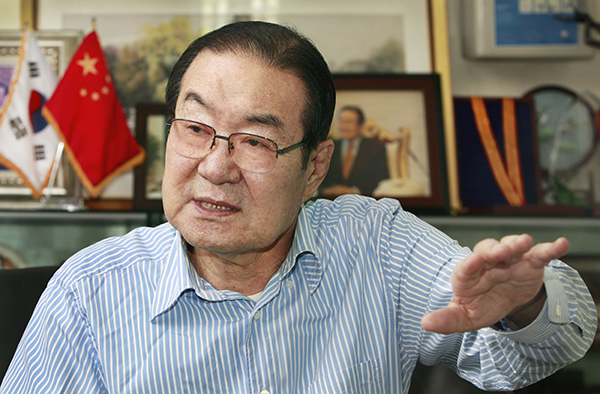 
Korea should take the 20th anniversary of diplomatic ties with China as a turning point to better understand the importance of guanxi, or the Chinese notion of networking to further business interests through personal connections, according to Lee Sei-kee, chairman of the Korea-China Friendship Association.

“The future of Korea-China ties depends completely on us - how well we maintain and develop guanxi, or personalized human networks, with contacts in China,” Lee said in a recent interview with the Korea JoongAng Daily. “Making better use of guanxi is even more important at this time, when the diplomatic situation has become more complicated,” he added, referring to recent thorny issues such as China’s detention of four South Korean activists, at least one of whom claimed to have been tortured. Lee said personal connections could have greased the wheels in such cases and sped up efforts to find a resolution.

Lee, a former four-term lawmaker, recently published a book entitled “Lee Sei-kee’s 20 Years of China Relations.” The 76-year-old, who also headed the Board of National Unification - since renamed the Unification Ministry - and the Ministry of Sports - now the Ministry of Culture, Sports and Tourism - is a leading expert on China. He has met with Hu Jintao, China’s incumbent president, as well as Xi Jinping, the man widely tipped to replace Hu, and Premier Wen Jiabao, and has developed friendly relations with all three. “Guanxi is a part of Chinese culture, and without understanding it or utilizing it, there will be a limit to how far ties can develop,” Lee said.

Q. What messages does your book contain?

A. One of the key messages I want to deliver is that building trust is important, not only in human relations but also in international relations. Korea and China should build mutual trust and try to understand one another by putting themselves in the other’s shoes. It’s no secret that there is a great deal of mistrust between the two sides, as evidenced by conflicts involving North Korean defectors and human rights activists like Kim Young-hwan. The best way to resolve thorny issues would be to have high-level face-to-face meetings and dialogues, but in reality, scheduling meetings is very difficult for both sides. Korea also needs to understand China properly within the context of its rapidly changing environment. In the wake of the 2008 financial crisis, the world’s economic wealth and power has gradually shifted from the United States and Europe to Northeast Asia, and at the center of the region stands China.

Korea and China celebrate 20 years of diplomatic ties on Friday. What changes have these brought to both countries?

I would say the establishment of diplomatic ties wasn’t accidental but inevitable, as it was based on mutual interest. Chinese leader Deng Xiaoping promoted reform and opening-up in 1992, three years after the Tiananmen Square protests. Forging diplomatic ties with South Korea was seen as a way to help create a more stable environment for China’s economic development.

For Korea, building diplomatic relations with China was seen as a way of shoring up security on the peninsula, which would in turn boost the economy. Korea would also gain easier access to China, the world’s largest factory and market.

In the early 1990s, the building up of Korea-China relations also improved ties between the two Koreas, which held a prime ministerial summit in 1992 and came up with the Inter-Korean Basic Agreement. Diplomatic ties between Korea and China helped foster peace, not only in the peninsula but also in Northeast Asia. Based on past experiences, strengthening these ties, especially in politics and diplomacy, can help ease tension on the peninsula, which has been mounting in recent years. If South Korea and China cooperate well on such matters, it could help pave the way for Korea’s reunification, which is why I greatly value China.

You are a first-generation expert on China in Korea. When did you start building bridges there?

When I was serving as the unification minister in 1985 I met with then-Chinese foreign minister Wu Xueqian in Bandung, Indonesia. It was the first ministerial meeting of its kind, and I became good friends with Wu. Through him, I was able to meet other Chinese officials later on.

How do you evaluate the bilateral relationship now?

We could describe the progress made in social and cultural terms over the last 20 years as a miracle. But in matters involving politics, diplomacy and security, there seems to be more misunderstanding than mutual trust. There is a lot of room for improvement. The reason why progress has been so slow is because of differences in Chinese policy toward North Korea and the South Korea-U.S. alliance. This came to the fore in 2010 when Pyongyang sank our Cheonan warship and shelled Yeonpyeong Island.

Will it be possible to overcome this deep-rooted sense of mistrust?

Historically, there are problems not only between Korea and China, but also between China and Japan as well as Japan and Russia. The countries all have problems with each other, and what’s worse, there are few signs of improvement. If you take the example of China’s so-called Northeast Project [an academic endeavor which aims to confirm China’s claim that the ancient kingdom of Goguryeo was a part of China], it’s natural for Koreans to get upset about it. However, we shouldn’t deal with issues like these emotionally. What is needed here is joint research. In 2004, China backtracked and Vice Foreign Minister Wu Dawei issued a five-point verbal agreement, including a pledge that Beijing would not seek to distort history. China should keep its promise. The Northeast Project is ongoing, and that worries me.