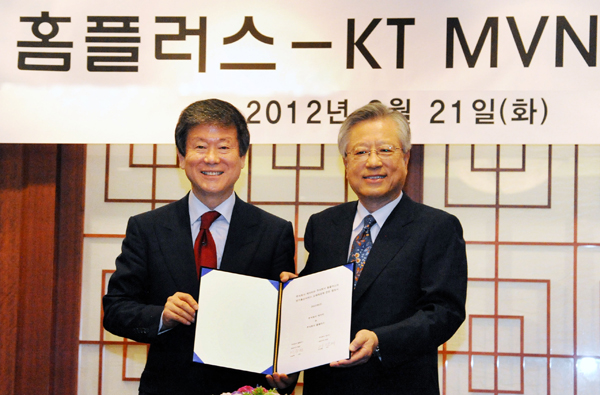 
Smartphones shoppers may be able to enjoy gains of up to 30 percent on their monthly bills before the end of the year after Homeplus rattled the domestic telecom industry this week by announcing it has teamed up with mobile operator KT to jump into a Mobile Virtual Network Operator (MVNO) business.

Renting the frequencies can provide customers with cheaper payment plans centered on basic calling services, as the user does not need to make any sizable investments.

The latest decision is likely to have a significant impact on the mobile telecom service market, as the MVNO will charge its customers monthly bills 20 to 30 percent cheaper than those offered by major mobile operators such as SK Telecom and LG U+.

Korea’s second-largest discount store chain said it will provide telecom services through its 130 distribution channels across the nation, potentially by the end of this year.

However, as the MVNO phones will offer cheaper payment plans, the services will be more limited than those currently offered by major mobile operators.

“We have not yet decided which services to exclude. We’re still negotiating with KT on this matter, and we expect everything to be resolved by the end of this year,” said Koo Do-yeon, a public relations manager at Homeplus. He said the limited service will hardly impact most users.

“The latest smartphones, including Samsung’s Galaxy S3 and Apple’s iPhone 4, will be available under the MVNO service,” he added.

The company is targeting one million subscribers within five years and hopes to keep forging closer cooperative links with KT to expand the available services, it said.

“Homeplus and KT both have a diverse range of customers, so we’ll introduce a variety of services to capitalize on our respective strengths in distribution and telecommunications,” said an employee at KT.

KT’s latest move comes as it has been struggling to play catch-up with SKT and LG U+ in the competition to see who can gain an edge in the faster long-term evolution (LTE) market.

Analysts say the profits KT can make from lending its network to Homeplus will help offset its slow-burning LTE business.

The MVNO deal will also sell handsets that run on KT’s LTE network, it said.

“The plan poses a major threat to mobile operators and SMEs that have been providing MVNO services.

“The biggest challenge for many MVNO businesses is their over-reliance on online customer bases, whereas Homeplus has a huge offline presence,” said an employee at KT.

Homeplus said it will likely expand the new service to its 325 Homeplus Express stores next year.

It also plans to introduce a variety of unique payment plans, such as providing discounted bills to those who purchase products from its stores.

While Homeplus’ move could revitalize the MVNO market, smaller telecom firms that provide similar services feel threatened by the emergence of a powerful competitor. Homplus is expected to make a successful entry into the telecom market as its parent company Tesco has been performing well since it launched MVNO businesses in Britain.