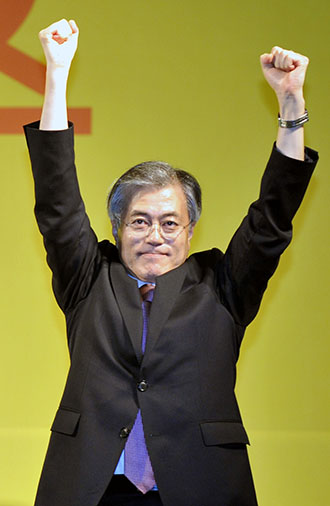 Moon Jae-in, a contender for the Democratic United Party’s presidential primary race, reacts after his landslide victory in the first regional election on Jeju Island on Saturday, defeating three other hopefuls. [NEWSIS]

A regional presidential primary of the main opposition party was crippled yesterday as some candidates boycotted the race and protested the current rules.

They cited a glitch in a cellphone voting system as a reason for their boycott. Three of the Democratic United Party’s four candidates said yesterday that they won’t run in the primary unless there is a change in the current rules regarding voting through phones. They didn’t show up at the joint speech as scheduled, and party delegates cast ballots without their presence.

On the second day of the primary held in Ulsan, Moon Jae-in, the winner of the first day of the election on Jeju Island, once again won the race by a large margin, obtaining 4,951 votes out of 9,508 valid votes, or 52.1 percent, against other three candidates.

In the nationwide primary started on Saturday on the southernmost island of Jeju, a total of four candidates were running: Moon Jae-in, a liberal lawyer and a former close aide to ex-president Roh Moo-hyun; Chung Sye-kyun, a former aide to former president Kim Dae-jung and former trade minister under the Roh administration; Sohn Hak-kyu, an Oxford-educated former DUP chairman who defected from the ruling party; Kim Doo-gwan, a farmer-turned-politician and former South Gyeongsang governor.

In the so-called “open primary” that allows eligible citizens older than 19 to join, a total of 36,329 party and citizen delegates have registered to vote on Jeju Island either through mobile phones or directly in polling stations.

“I thought the competition would be tough for me because my camp is relatively weaker,” Moon told reporters right after the turnout announcement on Saturday. “However, thanks to the voluntary participation of citizens, the result was far better than my expectations.”

However, after the primary, the three candidates except the winner Moon raised questions over fairness of the voting through cellphones. They argued that the present voting system using mobile phone favors Moon over others.

The voting system via cellphones uses a so-called audience response

system, in which people listen to a pre-recorded voice message and press a certain candidate’s number to vote. Moon, the winner, was No. 4, the last. Chung was No. 1, Kim was 2, and Sohn was 3.

Under the current rule, all voters should wait until the entire voice guidance message ends. However, if they press a button in the middle of the message, the vote becomes invalid.

So the three candidates with the earlier numbers argue that there must have been a number of nullified votes from people who press a number, presumably the earlier 1, 2 or 3, in the middle of the message and hung up the phone.

Saturday’s losers also argue that the turnout on Jeju Island is relatively lower than that of the championship election in June with the same mobile phone voting system.

At the time, the average turnout of voting through mobile phones reached up to 70 percent. They say that proves there could have been a bunch of nullified votes.

“It was unprecedented in a regional primary that a vote would be nullified if chosen in the middle of the voice message,” Kim said in a statement issued yesterday.

“There has never been a consensus over this rule among candidates. It’s an act in favor of a certain candidate.” Sohn also issued a long statement demanding nine things to be changed.

The top priority was to “totally revise the mobile phone voting system that nullifies votes pressed for candidate No. 1, 2 or 3, and accepts only those for No. 4 Moon.”

Sohn also demanded figuring out how many votes interrupted the voice message and to recover all of them. If it’s impossible, he says, an entirely new election should be held.

Chung also told reporters at a press meeting yesterday, “It’s needed for a high-profile official of the party’s election committee to promise a revision [in the rules].”