Push for chemical castration in wake of sexual offenses

Push for chemical castration in wake of sexual offenses 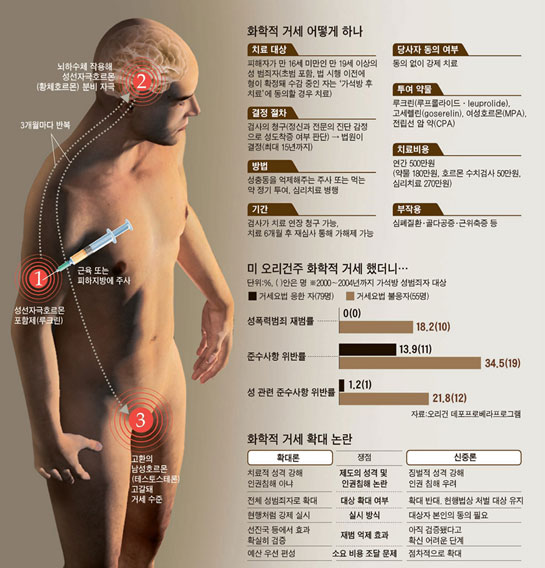 A 41-year-old ex-convict and repeat sex offender attempted to rape and fatally stabbed a mother of two in Gwangjin District, eastern Seoul, regardless of the fact that he was wearing an electronic monitoring device on his ankle last week.

With many occurrences of heinous sexual crimes lately, especially by repeat offenders, there has been an outcry for more severe measures to be taken against these criminals.

In response, the Saenuri Party stated yesterday it will push for measures to expand chemical castration as a means of punishment for all sex offenders.

Currently, chemical castration, which suppresses sex drive via injections that alter hormonal levels, is intended to treat sex offenders who are 19 and older and who have committed crimes against children younger than 16. The implementation of the punishment can either be decided by a court or the deliberation committee.

The injections are administered every three months and the effects are generally considered reversible when the treatment is discontinued.

“In cases where experts deem that the sexual drive is difficult to suppress, we are pushing to revise the law to enable chemical castration regardless of the magnitude of the crime,” said Representative Shin Eui-jin, a Yonsei University professor of psychiatry and member of Saenuri’s task force dealing with sexual crime policies.

On May 23, a 45-year-old repeat sexual offender, only known by his surname Park was sentenced to chemical castration after his most recent sexual assault attempt. He is the first sex offender to receive the treatment since the law went into effect in July of last year. Korea is the first Asian country to enable chemical castration.

Earlier this month, prosecutors requested the court issue an order so that a pedophile, a 30-year-old man surnamed Pyo, who sexually assaulted five teenagers in the past year, be chemically castrated.

In a recent survey conducted by the Korean Women’s Development Institute on female gender studies experts, 54 percent responded that chemical castration is “effective.”

But critics of the treatment state that the process violates basic human rights.

When chemical castration was legalized in 2010, the National Human Rights Commission stated that “there is infringement of human rights if the law is carried out without the consent of the individual” and recommended the Ministry of Justice review the decision.

The treatment is used in countries such as Poland and Russia and in some U.S. states, including California.

The task force further proposed yesterday to prevent sex offenders from employment in any facilities where minors frequent including PC rooms and even entertainment companies. They also will push for specific addresses of registered sex offenders to be available to the public.

The ministry is in the process of pushing to update its Internet database of registered sex offenders including with more recent, clearer pictures.