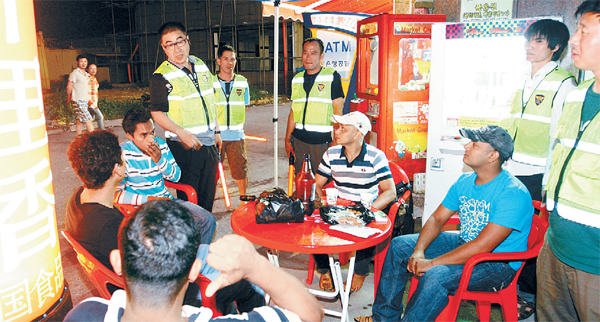 A voluntary patrol group made up of foreigners talks to their fellow non-Korean speaking employees during their shift in front of a grocery store in Yeongam County, South Jeolla, on July 16. Launched in April of this year, the 19-member patrol group has assisted the local police in reducing public disturbances. By Oh Jong-chan


“Taga saan?” asked Anton, meaning “Where are you from?” in Tagalog, the national language of his native Phillipines. He was talking to two Filipino workers sitting in front of a grocery store in Yeongam County, South Jeolla, enjoying a late-night beer.

After advising them not to stay out too late, Anton left to continue his patrol shift. He is one of 19 foreigners taking part in a volunteer patrol program launched in April of this year as part of efforts to reduce crimes and disturbances committed by foreigners, such as excessive drinking or the illegal disposal of trash in the county.

A veteran welder at a subcontracted company for Hyundai Mipo Dockyard for five years, Anton told the JoongAng Ilbo that “a sense of pride” encourages him be part of the foreigner-led patrol program.

“The idea that I am doing something for the community makes me proud,” he said.

Daebul Industrial Complex, where a cluster of shipping companies and their subcontractors is located, has become a hub of foreign workers in the region.

Vietnamese and Chinese make up a majority of the 4,200 foreigners, each accounting for 1,295 and 1,078 of that number, respectively. Most of them work at subcontracted firms for the Hyundai shipmaker.

“I came to Korea three months ago and have been helped a lot by other Vietnamese who came before me,” said Xuan Tam, 23-year-old worker. “I don’t feel nostalgic for home as there are many Vietnamese people here.”

Samho-eup has seen a spike in the number of foreigners in the past five years. Non-Korean speaking nationals now account for 16 percent, or 4,144, of its population of 26,474.

Taking illegal immigrants into account, that number is estimated to exceed 5,000.

The increase in the number of foreign workers in the countryside town has at times caused friction with the local community, stemming from the illegal disposal of trash and crimes arising from excessive drinking.

It was the Yeongam County Police Precinct that first came up with the idea of forming a crime prevention patrol group entirely made up of foreign workers to stave off these problems.

Police asked the 19 foreign employees to take the initiative and form the group in April, and they are now patrolling night areas popular amongst foreigners.

“Since the patrol group began exercising its duty, we have seen a decrease in alcohol-related crimes and local residents now worry less about public order thanks to them,” said Oh Cheon-bok, manager at Daehan Corporation, who has been in charge of the patrol group.