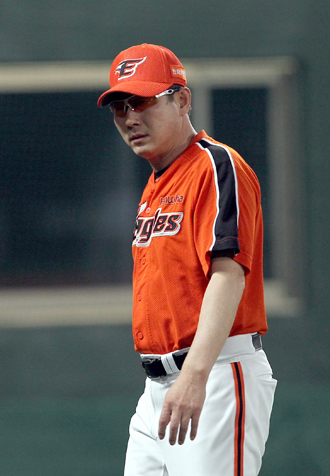 Hanwha Eagles manager Han Dae-hwa resigned yesterday, taking responsibility for the team’s disappointing season that has seen the Daejeon-based ball club in last place for the past three months.

The 52-year-old manager had one month left before the expiration of his three-year contract, making him just the second manager in the team’s history to resign early. Kang Byung-chul, who had managed the team since 1996, resigned before a mid-season break in 1998.

“Manager Han Dae-hwa expressed his will to resign on [Monday],” the Eagles said in a statement. “Chief assistant manager Han Yong-deok will manage the club for the rest of the games as an acting manager.”

Han Dae-hwa, one of the league’s star players in the 1980s and 1990s, took the helm of the club after the 2009 season. In his first year as manager, the Eagles finished in the last place with 49 wins and 82 losses.

Last year, the Eagles tied with LG Twins for sixth place with a slight improvement in its winning percentage - 59 wins and 72 losses - but this season, they have so far won 39 games, 22 games behind the first-place Samsung Lions as of yesterday afternoon.

“I am sorry to my fans who had high expectations,” Han told reporters yesterday. “There were many difficulties in managing the team, but I am also at fault for not being able to post good records.”

Han said a club official talked about his resignation with him on Monday night. He said he had thought the odds that his contract would be renewed at the end of the 2012 season would be low because of the poor results under his management, but did not expect he would resign in the middle of the season.

His remarks hinted that club pressure was the main reason for stepping down early, despite the official release declaring a “voluntary” resignation.

Han added that the club was already in a bad situation when he was named manager, having a scant pool of talent to develop. In the 2009 season, the Eagles, led by former manager Kim In-sik, recorded 46 wins against 84 losses, finishing in last place for the first time in the team’s history.

Han said he tried his best to turn the team around and has regrets for leaving without having pulled off the feat.

Kim Sung-keun, former manager of the SK Wyverns who led the Incheon franchise to the league’s championship three times through 2010, was reported to be a candidate for the new Eagles manager.

Kim is now leading the Goyang Wonders, an independent club in the Korea Baseball Futures League.

Lee, a former star player for the Binggrae Eagles, the predecessor of the Hanwha Eagles, won the KBO’s batting title twice in 1991 and 1992. Bugil High School has won the national championship three times since he became manager.