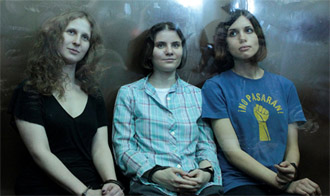 MOSCOW - Pussy Riot lawyers on Monday appealed the jailing of three of the Russian band members for their “punk prayer” call for Vladimir Putin’s ouster ahead of his election to a new presidential term.

The decision to contest this month’s controversial ruling came as news emerged that two other singers in the revolving-member group had fled Russia out of fear of being arrested by the police.

Defence attorney Violetta Volkova said that Pussy Riot’s appeal against the two-year imprisonment was filed with the Moscow City Court.

“All the papers are in order. The only question is whether we will need to file any additional material later,” Volkova told AFP.

Nadezhda Tolokonnikova and Maria Alyokhina - 22 and 24 respectively and both mothers of young children - and 30-year-old Yekaterina Samutsevich burst into Russia’s main cathedral wearing their trademark balaclavas and shouted out a few lines of their protest song on Feb. 21.

A Moscow judge ruled that the performance displayed “clear disrespect toward society” and convicted them of “hooliganism motivated by religious hatred”.

The ruling was instantly condemned by the United States and major European powers as another example of freedoms coming under pressure with Putin in power.

The unusual case sparked a worldwide celebrity and pop star campaign for Pussy Riot’s freedom that has enlisted the likes of Bjork and Madonna as well as Paul McCartney and Sting.

But Moscow investigators responded to the global pressure by launching a hunt for two other members of the group who took part in the protest stunt but managed to avoid police detention in the subsequent months.

The group’s on-stage masks hide their identity and Pussy Riot’s lawyers said that the Moscow police admit they only know the wanted women’s identities by the nicknames they use in the band.

But he refused to confirm that it was the two women wanted by the police or reveal any other details about where they had gone or when they might have left.

“The band has decided to keep this information to themselves as a security precaution,” Verzilov said.

An unofficial Twitter account used by Pussy Riot supporters claimed on Sunday that the two members who left Russia were the ones wanted by the police.